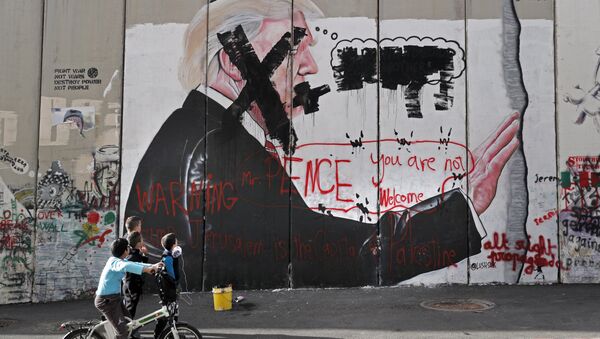 A representative from the governing Palestinian party, Fatah, said that his people will not accept the US as a partner in a peace process before it reverses its Jerusalem decision. Sputnik spoke with the Secretary of the Scottish Palestine Solidarity Campaign, Mike Napier, about how much the US has damaged its credibility among the Palestinians.

Sputnik: So just how significantly has the US marginalised itself and its influence as a so-called ‘mediator’ between the Israelis and the Palestinians?

Mike Napier: It’s a cumulative marginalisation of the USA, over many years the notion that the USA was a neutral arbiter between Israel and Palestine is only something that a fool could accept. Their utter and complete bias in their delivery of speeches and negotiations that the Israelis had written comes through in memoirs of Dennis Ross [Middle Easy Coordinator under former president Bill Clinton] and others. So the US was always a very committed ally, supporter and financier of Israel. I think the marginalisation is going to be deepened.

Sputnik: The burning question being asked by many now is, to whom will the Palestinians turn for support in peace negotiations and aid supplements if Washington follows through on its threats?

Mike Napier: There will be a few other significant powers, regional and international, to replace the USA. The EU for example, Merkel and Macron, are increasingly drawing the line between their foreign policy – which I don’t think is benign by the way towards the peoples of the Middle East – and that of the Trump camp. Not just over Iran, but also over Palestine. Then there’s the extension of Chinese economic and political influence into Europe, and obviously they would wish to exert a greater role over what’s happening in the Eastern Mediterranean. There’s Russia too, which emerges from the Syria civil war strengthened and the USA completely marginal to deliberations over that key aspect of Middle Eastern politics. I think that yes, the marginalisation of the USA is probably irreversible in the short and medium term.

The views and opinions expressed by Mike Napier are those of the analyst and do not necessarily reflect those of Sputnik.