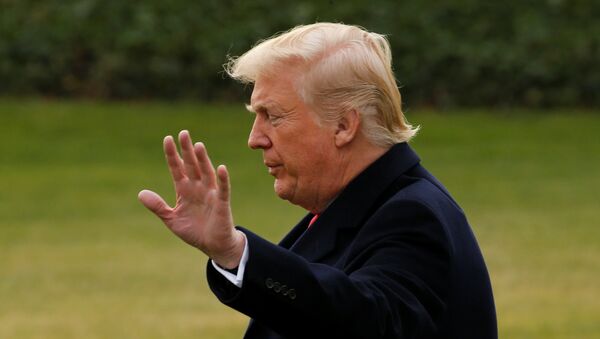 A new tell-all book attacking Donald Trump prompted the president to launch into a multi-tweet defense of his "mental stability and intelligence," but many Twitter users felt that Trump's response just made things a lot worse.

US journalist Michael Wolff's new book Fire and Fury, an account of the politics inside the White House during Trump's first year in office, has attracted considerable attention, in no small part thanks to President Trump's furious attacks on the journalist's credibility over the last several days.

On Saturday, Trump launched a multipart tweet-based stream of consciousness defending himself against what he said was the "Fake News Mainstream Media's" use of "the old Ronald Reagan playbook and screaming mental instability and intelligence." Actually, Trump stressed, his own "two greatest assets have been mental stability and being, like, really smart."

Trump Slams Fire&Fury's Wolff As Author Says Book Will Kick Him From Office
Pointing to his political victory against veteran politician Hillary Clinton in 2016, Trump suggested that this actually qualified him as "not [just] smart, but genius…and a very stable genius at that!"

The awkward 'stable genius' phrasing sparked an instant response of memes and jokes on Twitter, with users lambasting the president using pop culture references, and even starting up a #StableGenius hashtag.

Trump: “I tweeted that I’m a very stable genius”

Exclaiming “I’m a very stable genius!” is totally fine, if you’re Kanye. But even he wouldn’t use an exclamation point.

Others suggested that a real 'genius' would never feel the need to point to his intelligence, or his mental stability. Some simply pointed to the absurdity of the remarks.

Someone capable of publicly describing himself as a "very stable genius" is president of the United States. And you expect me to work with this material?

Phew! The President said he was a very stable genius. I was worried for a second there.

Doctor: ‘How would you describe yourself?’
Trump: ‘A very stable genius.’
Doctor (into intercom): ‘Cancel my one o’clock.’ https://t.co/mQEu95kqNi

Trump supporters also came out in force however, emphasizing the significance of his defeat of Clinton, who was widely expected to win the 2016 election by most observers, and even taking up the #StableGenius hashtag up for themselves.

Astounding that Trump detractors have not learned that every time he is attacked, he comes out smelling like a rose and boomerangs back on them. Is not the definition of insanity doing the same thing over and over again and expecting a different result? #stablegenius #AMJoy #MAGA pic.twitter.com/8LPR5nQASL

A President that has a running war with #FakeMedia and considers them among the most dishonest human beings on Earth is a #stablegenius in my book. @realDonaldTrump #AMJoy #MAGA #tcot #FoxNews pic.twitter.com/CAMEls24Mt