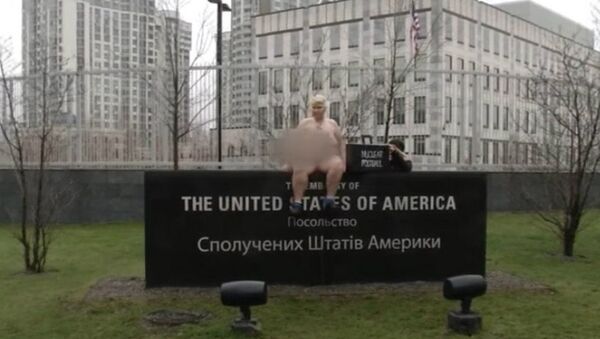 A FEMEN activist impersonating US President Donald Trump organized a rally in front of the US embassy in Kiev, Ukraine.

The activist was nearly naked and had the words “Mr. Big Button” emblazoned across her chest. She was protesting Trump’s ongoing war of words with North Korean leader Kim Jong-un.

The activist was seen holding a suitcase, symbolizing a "nuclear briefcase,” with the inscription "nuclear football". According to FEMEN, this rally was aimed at poking fun at "the war between two chauvinist fatties."

"Such rhetoric brings civilization back to the Cold War with its cult of nuclear truncheons and the hegemony of rapists. Mister Presidents, if God deprived you of a button, this is not a reason to destroy the world! “FEMEN press release read, Strana.ua reported.

Trump, Kim's Nuclear Buttons Quarrel Turns Politics Into Parody - Lawmaker
According to the publication, the Trump impersonator was 36-year-old Alexandra Nemchinova from Donetsk.

Speaking after the protest, the activist said that the “dick measuring” contest between the two leaders must stop and that FEMEN wanted to send their “greetings to Donald Trump and his patriarchal system.”

FEMEN was founded in Ukraine in 2008 and it became famous for its controversial protests, which involved female activists baring their chests with provocative slogans written across their bodies usually, highlighting issues such as prostitution, women’s and LGBT rights, fascism and religious intolerance.

On New Year’s Eve, Kim Jong-un, during his address to the North Korean people, said that he is keeping a button on his desk, ready to launch nuclear missiles. Donald Trump took to Twitter to respond to the North Korean leader, boasting that his "nuclear button" is bigger and more powerful.