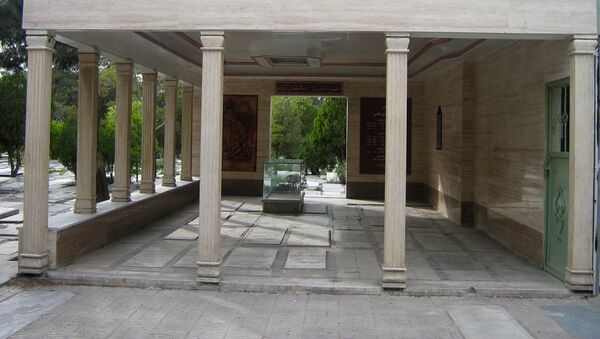 CC0 / /
Subscribe
Wrestling is extremely popular in Iran and is rooted in an ancient practice of combining the sport with physical education and meditation. Sputnik spoke to journalist Steve Bunce about plans to commemorate the death of a wrestler and national hero at a cemetery in Tehran on Sunday.

When wrestler Gholamreza Takhti won a gold medal at the Olympic Games in Melbourne, Australia in 1956 he became a national hero in his native Iran.

Twelve years later he died in mysterious circumstances in the Iranian capital, Tehran, and on Sunday, January 7, a crowd of up to a million people is expected to turn out at the Ibn Babawayh cemetery in the city to mark his death.

The occasion has extra poignancy after this week's demonstrations against economic conditions in Iran, which saw some protesters calling for the return of Reza Pahlavi, the heir to the Shah's throne.

Takhti, who was known as Jahān Pahlevān (World Champion), was 37 at the time of his death and had retired two years earlier.

He had been politically active for years, supporting Mohammed Mossadegh, the nationalist prime minister who was overthrown by a CIA-inspired coup in 1953, and had long been an opponent of the Shah's rule.

When the Iranian people were told by the authorities Takhti had committed suicide in a the Atlantic Hotel in Tehran in January 1968 few believed it, especially as he had left behind a wife, Shahla, and a four-month-old son, Babak.

Most suspected he had been snuffed out by the Shah's secret police, SAVAK, but it was only in 1979, after the Islamic Revolution that the truth came out, or at least part of it.

In 2007 Takhti was installed in the FILA Hall of Fame, which is now part of United World Wrestling.

Steve Bunce, a journalist who has covered boxing and wrestling at several Olympic Games, said Takhti's saintly reputation in Iran stemmed partly from his sportsmanship.

"The Savak killed him, no doubt. He was a national idol, adored for his sportsmanship on the mat — he would never take advantage of an injured opponent — and his opposition to the Shah's regime," Mr. Bunce told Sputnik.

"He campaigned for so many causes, raised cash for victims of the (1962) earthquake," said Mr. Bunce, who said Takhti was also idolized by former WWE wrestler The Iron Sheik.

Takhti hit the world stage in 1951 when he won a silver medal at the world wrestling championships and his success coincided with Iran becoming a major power in wrestling, which it remains.

The Iranian team has won the last six freestyle wrestling World Cups and aims to defend its title in April when the tournament will be held in the United States, in Iowa City.

Last year Iran banned US wrestlers from the freestyle World Cup, which was being held in Iran, in response to President Donald Trump's executive order forbidding visas for Iranians and it remains unclear whether the Iranian team will be allowed into Iowa in April.

It's time for another of @bigdaddybunce's Tales of the Extraordinary! 📖

The gold medalist, who was admired by @WWE's Iron Sheik, met a mysterious end…

Takhti won a silver medal at the Olympics in Helsinki in 1952 and went one better, with the gold, in Melbourne four years later.

He won the world championships twice, in 1959 and 1961, and retired five years later as his dominance was challenged and surpassed by Aleksandr Medved, from the Soviet Union, who would go on to win three Olympic golds and seven world championships.

Seven Iranians committed suicide after learning of Takhti's death, including a boxer who had spread gossip about problems in his hero's married life and then regretted it.

"A world without the World Champion is not a place to live," said one man from Kermanshah, in his suicide note.