© AP Photo / Petr David Josek
Subscribe
The top Iranian diplomat slammed US President Trump for his statement of support for the Iranian protests, saying that in fact his policy towards Iran has had a negative effect on the situation in the country.

Iranian Foreign Minister Javad Zarif has condemned US President Donald Trump’s show of "support" and "respect" for the people of Iran in the wake of mass protests in the Islamic republic.

"Trump has an odd way of showing 'such respect' for Iranians: from labeling them a 'terrorist nation' & banning them from visiting the US, to petty insults on the name of the Persian Gulf," Zarif said in a Twitter post.

​On Wednesday, Trump took to Twitter to show "respect" for Iranians taking part in the protests against "their corrupt government" and said the people of Iran will see "great support from the United States at the appropriate time."

In an earlier letter to UN Secretary General Antonio Guterres, Iran’s Envoy to the UN Gholamali Khoshroo denounced Trump’s support for the protests as "grotesque" meddling in Tehran’s domestic affairs.

Since December 28, Iran has been engulfed by mass protests, which began in response to a surge in fuel and food prices, poverty and high rates of unemployment. At least 20 people have reportedly been killed in the nationwide protests, and 450 people have been detained, according to media reports.

Official data estimates that 15,000 people rallied in protests in such cities as Tehran, Mashhad, Isfahan and Rasht. Iranian President Hassan Rouhani said Monday that the unrest had been provoked by a combination of existing domestic problems and outside influence. 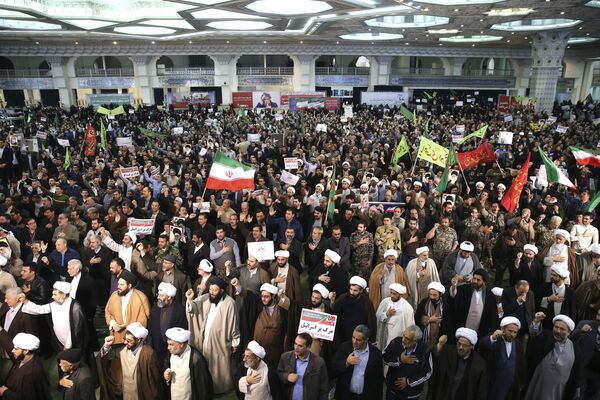 At the same time, Tehran also said that forces supported from abroad, including from the US, Israel and Saudi Arabia, were involved in the protests, aiming to destabilize the country. On Tuesday, the Islamic Revolutionary Guards Corps (IRGC) said that the riot of the year "had failed."

Further criticizing Trump’s policy on Iran, especially his negative attitude towards the Iranian nuclear deal, Zarif said that Washington’s attempts to derail the agreement are depriving the people of Iran of economic advantages of the agreement, also known as the Joint Comprehensive Plan of Action (JCPOA).

The JCPOA was signed July 14, 2015 between Iran and the P5+1 group of countries, comprising the US, Russia, China, France and the United Kingdom plus Germany.

The agreement, however, has taken a number of serious hits under the current administration, which has called it a "bad deal." The US president has repeatedly vowed to scrap the deal and accused Iran of violating the agreement. In October, the White House announced it would not certify Iran’s compliance with the deal.