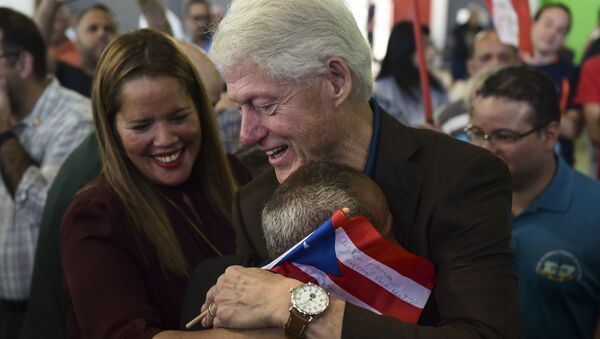 A new tell-all book from a Secret Service Officer who protected Bill and Hillary Clinton during the former’s term as president claims that Bill Clinton often snuck out of the White House to have secret rendezvous with “well-known and lesser-known mistresses.”

The book comes courtesy of Gary J. Byrne, a by former United States Secret Service Uniformed Division officer who first became well-known for his testimony during the proceedings that eventually led to Clinton's impeachment for perjury.

Byrne's book, Secrets of the Secret Service: The History and Uncertain Future of the U.S. Secret Service, claims that Clinton would order his protectors to ferry him around Washington in an innocuous motorcade so he could meet up with with his mistresses.

Worse, one one occasion a Secret Service agent, referred to as "Reverend" in the book, suffered a traumatic brain injury trying to keep up with the motorcade when another car T-boned his in an intersection.

Byrne wrote that Reverend, along with two others, were severely injured. DC police allegedly tended to the accident, having no idea that Clinton was being chauffeured around Washington incognito.

"Reverend was severely injured, as were another officer and two civilians. The convoy continued on. Metro PD was alerted, and that's when it learned that the Secret Service had been operating throughout DC in such a dangerous fashion," wrote Byrne.

"Reverend was hospitalized with a severe traumatic brain injury. It was significant enough that he was pulled from duty pending his recovery and even then would return only on 'light duty' status."

The Secret Service also tried to block payments to the Reverend, Byrne added, until he threatened to sue and expose Clinton's infidelities.

"Word of what had happened to Reverend spread like wildfire through the Uniformed Division because any UD officer could have been in Reverend's place," Byrne wrote. "And although many would take a bullet for the president, what was the risk for? Were Clinton's sordid personal affairs worth an officer's life? Was that the duty we had signed up for, the reason we spent so much time away from our families?"

Byrne added that Clinton had practiced similar methods with the Arkansas State Police during his tenure as the governor of The Natural State.

According to Byrne, the Secret Service was frequently exasperated with Clinton's infidelities. "If the president could not completely duck his detail, he would at least take them 'off the record,' or OTR," he wrote. "Sometimes this was done for highly honorable reasons, such as when President Clinton, without fanfare, along with many other top military leadership, visited the grieving widow of a fallen high-ranking military official."

"But the freedom of OTRs under this president was soon to be abused and, in one instance, nearly cost an officer his life. President Clinton used the OTRs to visit the well-known and lesser-known mistresses he frequented outside the complex, meaning the ones who did not have access to the White House."

Byrne spent almost 30 years in federal law enforcement: the US Air Force Security Police, the Uniformed Division of the Secret Service, and finally as a Federal Air Marshal. He has since retired and penned two books on his work in Clinton's Secret Service.

The first book, Crisis of Character: A White House Secret Service Officer Discloses His Firsthand Experience with Hillary, Bill, and How They Operate, was released in June 2016. Like its sequel, Crisis of Character painted a negative picture of the Clintons, illustrating their contentious and troubled marriage. Byrne concludes that, based on his experiences, then-presidential candidate Hillary Clinton "lacks the integrity and temperament to serve in the office."

Unsurprisingly, the book was a huge hit with enemies of Clinton and supporters of her Republican rival Donald Trump, and was in turn maligned by left-wing outlets. The Association of Former Agents of the United States Secret Service also questioned some of Byrne's claims and argued that he was damaging the trust between the Secret Service and the First Family.