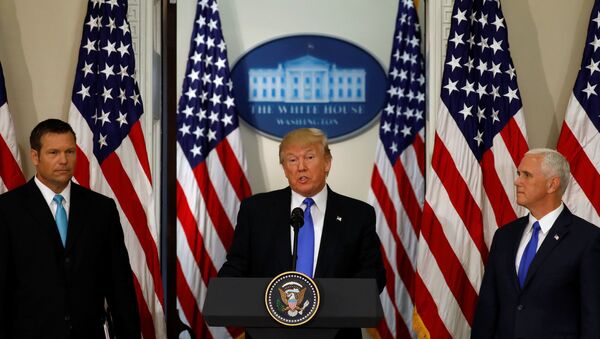 © REUTERS / Kevin Lamarque
Subscribe
WASHINGTON (Sputnik) - The White House Office of the Press Secretary in a statement said that President Donald Trump has ordered the disbanding of the election integrity commission despite evidence of voter fraud.

"Despite substantial evidence of voter fraud, many states have refused to provide the Presidential Advisory Commission on Election Integrity with basic information relevant to its inquiry," the statement said on Wednesday. "Rather than engage in endless legal battles at taxpayer expense, today I signed an executive order to dissolve the Commission, and have asked the Department of Homeland Security to review these issues and determine next courses of action."

According to US-based media reports, the reason behind the abrupt decision to shut down a White House commission on voter fraud was that the panel failed to provide any sufficient evidence that the US elections were somehow corrupt.

However, the US President was reportedly not fully aware of the commission's inability to obtain any proof of alleged voter fraud, instead Donald Trump emphasized the dissolvent as lack of cooperation between the panel and particular states.

"Many states have refused to provide the Presidential Advisory Commission on Election Integrity with basic information relevant to its inquiry," Trump said in a White House statement.

Trump Claims At Election Integrity Commission Meeting to Stop Voter Fraud in US
According to The New York Times, Trump's panel faced strong reluctance among election officials from every state to disclose any relevant information on voting. Remarkably, many Republicans have also rejected the commission's inquiries.

Donald Trump established the Presidential Advisory Commission on Election Integrity last year with the ultimate aim of finding evidence of alleged illegal ballots being cast which lead to his loss of the popular vote to Democratic candidate Hillary Clinton in 2016.

According to The Washington Post, the investigative panel gathered just a couple of times amid the numerous lawsuits challenging its authority and constant rebukes of Democrats about the commission's alleged lobbying interests in favor of voting restrictions convenient to the president's party.

The voter fraud commission had been chaired by the US Vice President Mike Pence and led by Kansas Secretary of State Kris Kobach. According to US media reports, last months, Pence had distanced himself from its activity.

000000
Popular comments
It now passes to the Department of Homeland Security, where Democrats have no control over it, and the DHS already has all the information needed that was already publicly available. In addition, Judicial Watch continues with their lawsuits to force states to clean up their voter rolls. Apparently, defying the President seems to be a joke, but defying the Judicial System puts people behind bars.
Trihalo42
4 January 2018, 08:41 GMT1
000000
Newsfeed
0
New firstOld first
loader
LIVE
Заголовок открываемого материала
Access to the chat has been blocked for violating the rules . You will be able to participate again through:∞. If you do not agree with the blocking, please use the feedback form
The discussion is closed. You can participate in the discussion within 24 hours after the publication of the article.
To participate in the discussion
log in or register
loader
Chats
Заголовок открываемого материала
Worldwide
InternationalEnglishEnglishMundoEspañolSpanish
Europe
DeutschlandDeutschGermanFranceFrançaisFrenchΕλλάδαΕλληνικάGreekItaliaItalianoItalianČeská republikaČeštinaCzechPolskaPolskiPolishСрбиjаСрпскиSerbianLatvijaLatviešuLatvianLietuvaLietuviųLithuanianMoldovaMoldoveneascăMoldavianБеларусьБеларускiBelarusian
Transcaucasia
ԱրմենիաՀայերենArmenianАҧсныАҧсышәалаAbkhazХуссар ИрыстонИронауОssetianსაქართველოქართულიGeorgianAzərbaycanАzərbaycancaAzerbaijani
Middle East
Sputnik عربيArabicArabicTürkiyeTürkçeTurkishSputnik ایرانPersianPersianSputnik افغانستانDariDari
Central Asia
ҚазақстанҚазақ тіліKazakhКыргызстанКыргызчаKyrgyzOʻzbekistonЎзбекчаUzbekТоҷикистонТоҷикӣTajik
East & Southeast Asia
Việt NamTiếng ViệtVietnamese日本日本語Japanese俄罗斯卫星通讯社中文（简体）Chinese (simplified)俄罗斯卫星通讯社中文（繁体）Chinese (traditional)
South America
BrasilPortuguêsPortuguese
NewsfeedBreaking
15:46 GMTIraqi Asylum Seeker Jailed After UK CCTV Operator Spots Him Raping Unconscious Woman on Seafront
15:36 GMTPentagon Contract Seeks Alternate GPS Using Low Earth Orbit Satellites
15:27 GMTRuckus Over AUKUS
15:26 GMTUS Regulator Approves Creation of Nuclear Dump in Texas Despite Opposition From Local Authorities
15:23 GMTRussian Gov't Allocates $60Mln to Produce Soyuz Spacecraft for Tourist Flights
15:17 GMTSyrian Kurdish Leader Discussed Turkish Attacks During Moscow Visit, SDC Says
15:07 GMTEU Commission Chief Announces Launch of Competitor to China’s Belt and Road
14:51 GMTEU Not Informed About New US, UK & Australia Alliance, Plans ‘to Assess Implications’
14:48 GMT'BJP's Politics Behind 96% Jump in Communal Riots in India', Says Opposition Congress
14:46 GMT‘No Friend of China’: As Raab Exits Stage Left, What Will UK Foreign Policy Look Like Under Truss?
14:34 GMTSouth African Child Maintenance Payments Delayed by Ransomware Attack
14:34 GMTEuropean Gas Futures Fall Below $750 Per 1,000 Cubic Meters
14:29 GMTIs the Age of the Car Over as Politicians Around Europe Declare War on the Motorist?
14:29 GMTMessage for India? AUKUS Announcement Sparks Debate About Relevance of Quad, Reliability of US
14:15 GMTBlack Market Business for Foreign Visas Skyrockets in Afghanistan, Reports Say
13:29 GMTSequoia National Park in California Closes Due to Massive Wildfire, Administration Says
13:28 GMTRussia Threatens to Take Measures Against US Over Interference in Elections, Foreign Ministry Says
13:28 GMTCricketer Virat Kohli Confirms He Will Step Down as India's T20I Captain After ICC T20 World Cup
13:22 GMTShell Touts Plans for One of Europe's Largest Biofuel Plants
13:16 GMTWomen's Average Salary in Saudi Arabia Has Exceeded That of Men for the First Time, Report Says