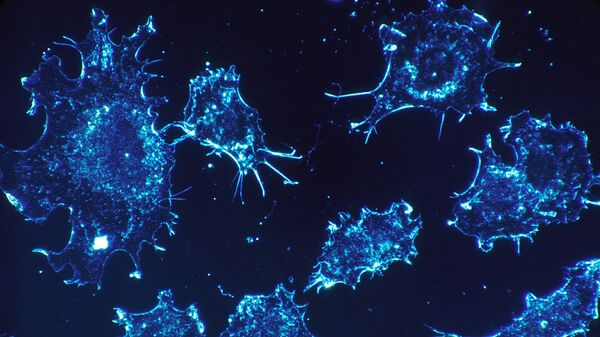 CC0 / /
Subscribe
International
India
Africa
When Sapna Tracy was diagnosed with cancer in 2015, she had the option to terminate her pregnancy and immediately start treatment. But she chose to wait until she delivered the baby. Her husband Joju spoke to Sputnik about Sapna's pro-life convictions and how her family is coping with her death.

New Delhi (Sputnik): Sapna Tracy, a mother of eight and a pro-life campaigner, will be forever etched in the memory of the current generation and many more to come as she gave up her life for her conviction to life. In December 2015, Sapna delivered her eighth baby- a baby that could have ended in the womb had not she turned down the advice of her doctors to terminate her three-month-old pregnancy when she was diagnosed with breast cancer.

Asia
Growing Cancer Risks in India
Doctors at the Indian Institute of Medical Sciences (AIIMS) had warned Sapna that if she did not terminate the pregnancy and start chemotherapy immediately cancer would spread to her lungs and could possibly take her life. But Sapna chose her child's life over her own. Not only did she refuse to abort the child but insisted she would wait until she delivered the child to undergo radiation therapy. Two years later, as all her eight children celebrated Christmas, Sapna breathed her last.

Sapna and Joju, her husband hail from the southern state of Kerala and were the pro-life campaigners for the Catholic Church in India. Her sad but proud husband proclaims and explains their beliefs in an interview with Sputnik.

Sputnik: Joju, please tell us something about your faith orientation and was the refusal of medical treatment a personal decision of Sapna or was it a family decision?

Joju: We were active members of Jesus Youth events and the Charismatic Renewal movements of the Catholic Church. We share a view and are proud to reiterate that we are against any sort of termination of life gifted by God. I worked as a social worker in Delhi and she was working with AIIMS while we shared the pro-life tenets of the Church with others. We are strictly against abortion. Tracy was diagnosed with breast cancer when she was in the third month of her pregnancy and doctors wanted to terminate the child to immediately start the medication, which she declined. It was the personal decision of Tracy and, we as a family could hardly influence her commitment to not agree to feticide.

Sputnik: What was the logic behind putting her life in danger while taking that decision?

Joju: It would be wrong to say that we declined medication; after the child was born we resumed the treatment for cancer as per the doctor's advice. Tracy was determined not to terminate the fetus in her womb as she said she was the only person who could bring it into this world while she was convinced that there are many good-hearted people who would take care of all of her children if needed. In fact, the mastectomy process was done in the sixth month of pregnancy but we allowed radiation therapy only after the child's birth.

Sputnik: As a person supporting pro-life campaigns what is your view on the fact that population growth is a challenge which countries like India are struggling with?

Science & Tech
Russia Improves Detection of Cancer Stem Cells Allowing for Better Treatment
Joju: It is up to us to look at our citizens and our population as a liability or asset. It is a motivated propaganda to picture population as a menace. The fact is that this world is suffering from a lack of human resources and many countries have already started feeling the heat from this. We are brought up with the images of a population explosion with overloaded trains and traffic on roads, etc. The reality is that these are the rarely seen visuals in some metropolitan cities while if you travel the world there are huge patches of uninhabited areas. By no means can one justify the termination of life.

Sputnik: After Sapna's death, what are your future plans to spread the message which she stood for? Also, do you know that your message is contradictory to the popular public policy on family planning in India?

Joju: We should consider life very precious. We have no right to terminate it. I stand for the non-use of contraceptives and only natural family planning is the way to plan our family size. We believe children are a gift of God and they need to be nurtured in a way that they grow in perfect love with siblings and an extended family. This can help them to grow as emotionally stable and peace-loving citizens of the country. A good nurtured population will drive the development of any nation.