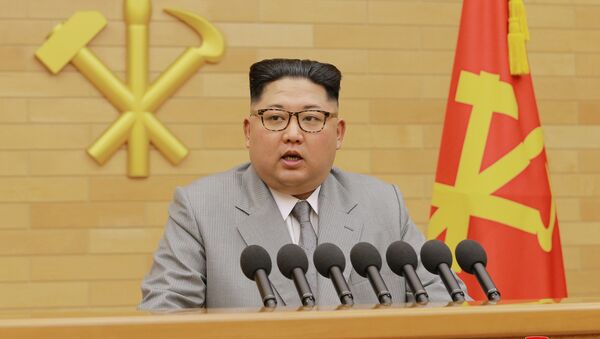 Unusually soft rhetoric from the North Korean leader towards his southern neighbor has sparked considerable speculation as to whether he is indicating his readiness for a major shift in his country’s foreign policy.

The move was welcomed by Seoul, with South Korea's Unification Minister Cho Myoung-gyon proposing to hold high-level talks with Pyongyang on January 9 in the demilitarized zone that separates the two countries.

On Wednesday, Reuters reported that Kim reopened a cross-border communication channel with South Korea in the truce village of Panmunjom for the first time in nearly two years.

North Korea Vows to Pursue Nuclear Weapon Despite Sanctions
Some analysts suggest that by offering an olive branch to South Korea, Kim may be trying to split Seoul from Washington, its close ally, a concern expressed earlier by the US State Department.

"Kim Jong-un may be trying to drive a wedge of some sort between the two nations, between our nation and the Republic of Korea. I can assure you that that will not happen," State Department spokesperson Heather Nauert told journalists on Tuesday.

According to Robert Litwak, a scholar at the Woodrow Wilson International Center for Scholars, the timing of Kim’s statement was very well calculated, taking into account the fact that Pyongyang has declared its capability to deliver a missile strike anywhere in the US.

"Kim sees a rare chance here to take the side of the South Koreans, against President Trump," Litwak told The New York Times.

"He's developing nukes while trying to weaken international pressure and the South Korea-US military alliance and get international sanctions lifted," the analyst said.

Daniel Russel, a senior fellow at the Asia Society Policy Institute, told The Washington Post that there is nothing new in the recent actions by Pyongyang.

"It would be naive to expect North Korea to negotiate in good faith or consider itself bound by new agreements, given its past record," Russel said. "Pyongyang’s pattern is to raise tensions to a fever pitch, dangle a conciliatory offer, collect any and all concessions, then rinse and repeat."

'Window for a Pause'

Evan Medeiros, former Asia director for the National Security Council under the Obama administration and now heading the Eurasia Group’s coverage of the Asia-Pacific region, told The Washington Post that a "temporary reduction" in tensions is possible, but it will result in a serious division between the US and South Korea.

"There has been a lot of speculation that he is trying to make North Korea look more modern and connected," Robert Kelly, a political-science professor at Pusan National University in South Korea, told The New York Times, commenting on Kim’s new look. "It’s a flimflam. Just a show."

READ MORE: New Dawn? Seoul Claims North Korea Might Negotiate with US in 2018

According to Royal United Services Institute director of proliferation and nuclear policy Tom Plant, the recent statement by the North Korean leader was an olive branch, but also a strategic play.

"I would view this as a temporary positive-ish in that [Kim Jong-un] isn’t saying 'let’s go to war today.' It’s a window for a pause… They do want to lower the tone a bit. North Korea has no interest of going to war and they will be picking up the signs [from Washington] as well," Plant told News.com.ua.