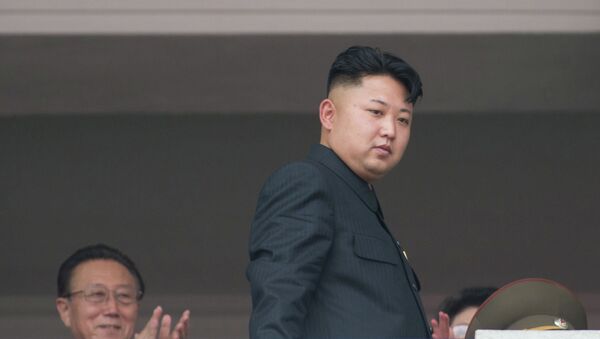 MOSCOW (Sputnik) - North Korean leader Kim Jong-un has ordered the reopening of a contact channel between Pyongyang and Seoul to discuss issues related to the upcoming Olympic games in Pyeongchang, Ri Son Gwon, the head of North Korea's agency handling inter-Korean affairs, said as quoted by the Yonhap news agency.

"I was instructed to open the Panmunjom [the shared border village] contact channel between North and South at 15:00 [3:30 p.m. in Seoul, 6:30 GMT] in order to settle issues related to hosting the PyeongChang Olympic Games, including sending [North Korea's] delegation to the Games," Ri said.

The officials added that Pyongyang would closely work with Seoul on practical issues related to sending the country's delegation to the upcoming sports event, based upon the leadership's stance, and expressed the hope that the Olympics would be successful.

"We sincerely wish once again that the PyeongChang Olympic Games will be held successfully," Ri said.

"I believe it signals a move toward an environment where communication will be possible at all times," Yoon Young-chan, the chief presidential spokesman, told reporters, as quoted by the news agency.

Pyongyang's statement came a day after Seoul proposed high-level discussions with the DPRK, following Kim's New Year's address in which he had stressed he was willing to launch a dialogue with South Korea.

'I Have Bigger Button': Trump's Tweets Threaten to Derail Korean Talks - Analyst
Meanwhile, US Envoy to the United Nations Nikki Haley warned in a statement on Tuesday that Washington would not recognize any talks between the two Koreas unless the nuclear issue is resolved and all of their nuclear weapons banned.

North Korean leader Kim Jong-un said in his New Year’s Day address that Pyongyang was ready to send its athletes to the 2018 Winter Olympics in Pyeongchang, South Korea, and expressed readiness to start talks with Seoul on the issue.

Seoul, in turn, has proposed holding high-level talks on January 9 in Panmunjom Village in the demilitarized zone between North Korea and South Korea.