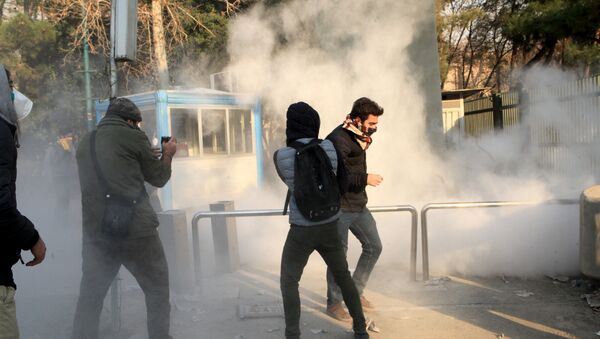 TEHRAN (Sputnik) - Commander of the Islamic Revolutionary Guards Corps (IRGC) Maj. Gen. Mohammad Ali Jafari announced on Wednesday that the riot of the year was over without any success for protesters.

Jafari also accused Washington, Tel Aviv and Riyadh of ordering militants of the Daesh terrorist group (outlawed in Russia) to penetrate into Iranian territory "with the aim of subversion."

This position echoes Iranian President Hassan Rouhani's statement made on January 1, in which he stated that the unrest had been provoked by a mix of existing internal problems and foreign influence.

READ MORE: Rouhani: Iran Protests 'Type of Threat Which Should Be Turned Into Opportunity'

Jafari's statement was made in wake of US President Donald Trump's promise of Washington's support "at the appropriate time" for Iranians protesting against President Hassan Rouhani's government, made earlier in the day.

The anti-government protests, the largest in nearly a decade and praised by some leaders, have been raging in Iran since December 28, as a response to a surge in fuel and food prices, as well as high rates of unemployment, inflation and air pollution. Several major cities in Iran, including Tehran, Mashhad, Isfahan, and Rasht, have been hit with protests.

The social unrest has thus far claimed the lives of at least 20 people and resulted in 450 people being detained.