India, Israel Use Soft Power of Cinema to Cement Collaboration 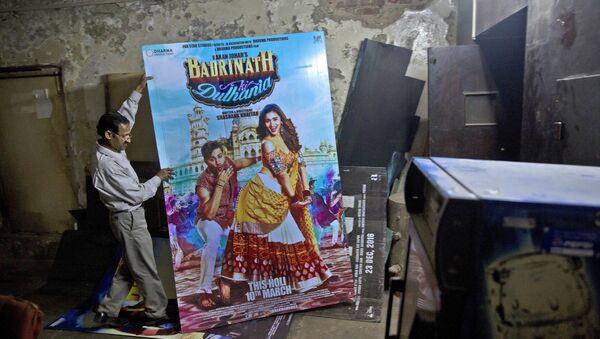 © AP Photo / Manish Swarup
Subscribe
The dubbed version of the Israeli tele-series 'Hatufim' recently debuted on Indian television under the title 'POW-Badhi Yuddh Ke' on India's Star Plus channel. The experiment has been successful, the Indian audience responded warmly. India’s first film shot in Israel is also expected to hit the screens in 2018.

New Delhi (Sputnik) — Buoyed by the recent surge in India-Israel collaboration in new fields other than defense and agriculture, filmmakers rom both the countries are looking at collaborating in co-productions.

A group of India filmmakers was recently in Israel to explore and learn more about the opportunities India-Israel cooperation might yield in film-making. The delegation included renowned filmmakers and television producers.

"The India — Israel film collaboration will benefit both countries. Israel has perfect locations for shooting Bollywood films. Israel has landscape, climate and a thriving nightlife that Bollywood producers want. I am very much impressed by the attitude of both the people and government of Israel," renowned Indian filmmaker Imtiaz Ali, who was part of the delegation to Israel, told Sputnik.

Ahead of Israeli Prime Minister Netanyahu's visit to India later this month, the two countries are working on co-production agreements between their two respective film industries. The governments of both countries plan to sponsor collaborative work.

The Bollywood delegation visited Israel at the behest of the Israel Film and Television Producers Association.

India, Israel Among Five Teams Fighting For First Private Moon Landing
"The members of the delegation were wowed by the variety of scenery in Israel and how, during a two-hour journey, they went from a desert to the lush green coastal region," Temi Ben Chaim, local coordinator for the Indian delegation was quoted as saying by the Israeli media.

The team of an upcoming Bollywood movie, ‘Drive', featuring Jacqueline Fernandez and Sushant Singh Rajput has already completed shooting in different parts of Israel. This was the first mainstream Indian movie to be shot in Israeli locations. Channel 2 TV reported that the shooting was partly funded by the Israeli government.

Analysts in India are also upbeat about the coming together of the two countries in film-making and say that it would be a win-win situation for both.

India's Oil Gamble With Israel to Upset Ties With Iran, Arab World - Analysts
"Shooting of Indian films in West Asia was mostly limited to Dubai till now. Addition of a new location will add to the freshness and creativity of Indian cinema. In return, the Israeli film industry will have a lot to learn from the prolific Indian film industry which spans into multiple languages. The youngsters in the two countries will specifically benefit from this exchange and undoubtedly if pursued further, this can be a major money spinner for the entertainment industry in Asia," Film academician and Bollywood market observer Naresh Sharma told Sputnik.

While exporting its films to Israel, co-productions to appeal to a new segment of the audience would be another feather in the cap of Bollywood, India's film industry. The Israeli film industry is also looking at increasing its appeal beyond its borders.

"Indian filmmakers will benefit from incentives given in the shoot and production while in turn, the Israeli government could see a surge in Indian tourists to the locations because Bollywood rules Indian mindset and inspires every walk of our lives," Naresh Sharma added.