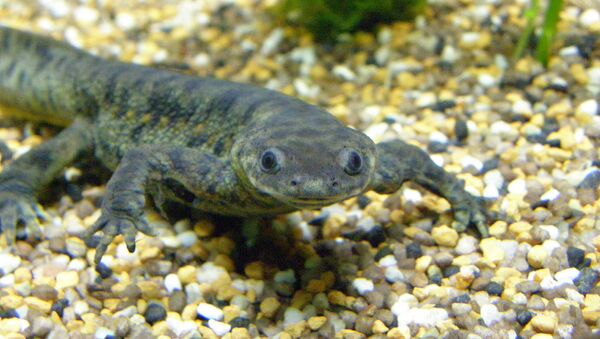 In an interview with Sputnik, Ahmed Elewa, one of the Swedish scientists sequencing the genome of the Iberian salamander, who wrote the related study and is a postdoctoral fellow at Karolinska Institute's Department of Cell and Molecular Biology in Solna in Greater Stockholm, told Sputnik about the importance of her work.

The scientific team of Karolinska Institute's Department of Cell and Molecular Biology in Solna, Greater Stockholm managed to effectively sequence the genome of the Spanish ribbed newt that inhabits the southern Iberian Peninsula and Morocco. The researchers identified protein-coding genes in the genome which provide clues to the animal's regenerative abilities.

When asked why they chose the salamander for their research, Ahmed Elewa, author of the study and postdoctoral fellow at Karolinska Institute's Department of Cell and Molecular Biology, referred to the amphibian's "extraordinary ability to regenerate."

"We call them champions of the regeneration. […] They are obviously doing something that we can't and we can understand secrets behind that. It has a lot of potential medical benefits for us," Elewa said.

Now that "the researchers have a genome sequence," it is possible for them "to understand the mechanism behind the regeneration," he said.

He cited "a couple of surprises" related to sequencing the genome of the Iberian salamander, which he said does not rely on a gene called 'pack seven' like mammals do when regenerating their skeleton muscles; it uses a different mechanism.

"We have also found that a few genes become active and expanded after an injury and the beginning of the regeneration process and therefore play an important role in regeneration," he said.

Elewa suggested that the process of regeneration in salamanders relies on activating some of the genes responsible for the amphibian's embryonic development.

"[…] Once we have a number of genes that we think are important for the salamander's regeneration, we would activate them in frogs and afterwards in mammals," he said.

Stressing the importance of triggering the regeneration response, Eleva pointed out that the scientists' long-term goal is "to bring this [regenerative] ability to other animals, especially to human beings."

READ MORE: Octopuses Can Edit Their Own Genetic Code to Increase Intelligence

When asked how long it will take to apply the technology, he said that "in terms of genome sequence, this is available [already] today for download with no charge at all."