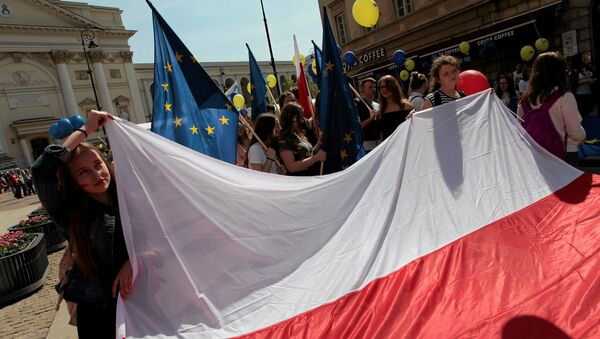 Deutsche Welle political contributor Bernd Riegert says Warsaw is putting the EU at risk of collapse, and that other members may be forced to kick the country out of the bloc.

This month, officials in Brussels triggered Article 7 of the Lisbon Treaty, paving the way for sanctions against Warsaw, over what it said were Poland's "systematic" violations of the rule of law in its treatment of the country's judiciary.

Warsaw slammed the move, saying it was a political decision that had nothing to do with the rule of law. After an investigation, the Polish government will have to defend its position before the European Council, after which the body will vote as to whether or not to suspend the country's voting rights.

Migrant Quota Question Could Cause Schism Between EU and Poland, Hungary
With Poland currently being one of the largest net recipients of EU funds, net contributor states like Germany have increasingly pushed for changes to EU policy to match contributions and funds received.

In an op-ed for German international broadcaster Deutsche Welle, European politics contributor Bernd Riegert went a step further, arguing that if push comes to shove, Poland and other "renegade states" may have to be kicked out of the bloc altogether.

According to Reigert, Poland, along with its populist allies the Czech Republic, Slovakia and Hungary, "appear to not have fully completed the transition from erstwhile communist dictatorships to societies based on the rule of law."

"Disregarding the very rules they have signed up to" by refusing to implement the EU's migration policy, these countries, according to the observer, need some "reminding" that "their countries helped overcome the division of Europe when they voluntarily joined the EU back in 2004."'

"The overriding question in 2018," in Reigert's view, will be whether "the EU member states [can] force the Visegrad countries (Poland, the Czech Republic, Slovakia and Hungary) to comply with and respect the rule of law." 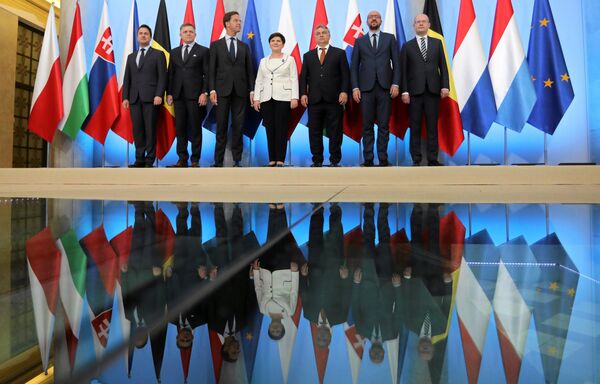 The alternative, he noted, "could make it impossible for the EU to continue operating as it does today. The EU as we know it would be finished."

Hungarian PM Orban Vows to Block Any EU Sanctions Against Poland
This is made all the more challenging by the rise of right-wing populist parties in other EU states, including Austria. However, Germany, France, Belgium, and other members looking to preserve bloc unity, and which contribute the lion's share of its funding "will have to threaten to cut off the money supply to Poland and its neighboring renegade states," Reigert argued.

This will be made possible in 2018 because that's when negotiations on the bloc's budget as of 2021 will begin. Furthermore, if it wanted to, the EU could even expel Warsaw from the European single market, thereby dealing "a heavy blow to Poland's economy and severely restrict[ing] movement for Polish workers."

Hopefully, the observer suggested, this sort of EU pressure will push Poles into voting the national conservative Law and Justice out of power. "Otherwise, Poland might have to be expelled from the bloc," he stressed.