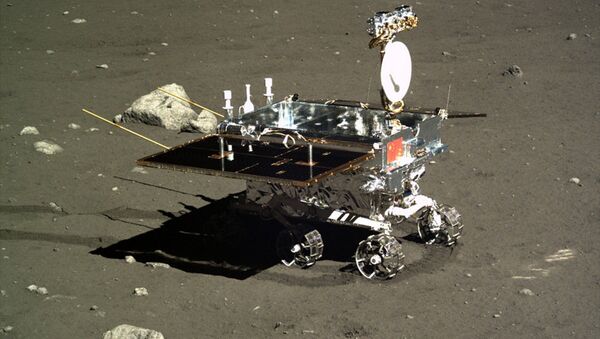 © CASC/China Ministry of Defense
Subscribe
2018 could see a breakthrough in lunar exploration: China is planning a mission that, if successful, will see a space landing on the far side of the moon for the first time.

The first part of China's Chang'e 4 space mission will launch in June. A Long March 4C rocket will carry a 425kg relay satellite and station it some 60,000km behind the moon. A second launch later in the year will send a lander and rover to the far side of the moon, guided to a safe landing by the satellite.

Aboard the Chang'e 4 lander will equipment to study the geological conditions of the region, as well as a container made from aluminium alloy filled with seeds and insects.They will be used to test whether plants and animals could be grown on the moon.

"The container will send potatoes, arabidopsis seeds and silkworm eggs to the surface of the Moon. The eggs will hatch into silkworms, which can produce carbon dioxide, while the potatoes and seeds emit oxygen through photosynthesis. Together, they can establish a simple ecosystem on the Moon," Zhang Yuanxun, chief designer of the container, told the Chongqing Morning Post, according to China Daily. 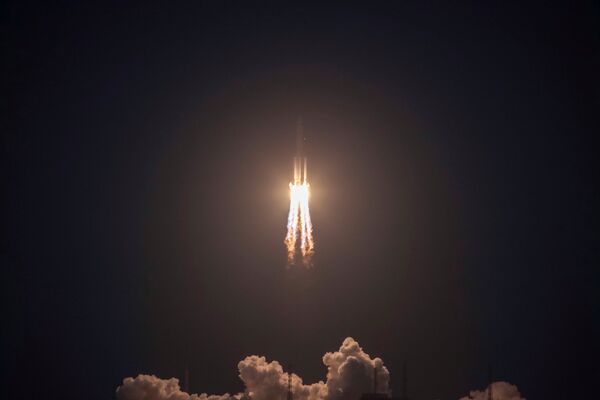 The Long March-5 Y2 rocket takes off from Wenchang Satellite Launch Center in Wenchang, Hainan Province, China July 2, 2017.
© REUTERS / Stringer
Another advantage of a mission to the far side of the moon, is that a radio telescope stationed there would be undisturbed by radio signals coming from Earth, such as FM radio and the planet's ionosphere.

Astrophysicist Professor Heino Falcke of Radboud University, Nijmegen (The Netherlands) told the Guardian that he has been in talks with the Chinese and is hoping that his radio telescope will make it onto the mission. Falcke aims to use the telescope to detect low-frequency radio waves from the early universe.

"I think we built up a lot of good relations in China and there is goodwill on both sides to make this happen," the scientist said.

000000
Popular comments
we need on to land at the supposed american landing site to clear up once and for all whether they did or not...Not an american one of course ..They cannot be trusted to be honest
tonyw247
31 December 2017, 23:10 GMT1
000000
something to look forward to. :)
michael
2 January 2018, 01:21 GMT1
000000
Newsfeed
0
New firstOld first
loader
LIVE
Заголовок открываемого материала
Access to the chat has been blocked for violating the rules . You will be able to participate again through:∞. If you do not agree with the blocking, please use the feedback form
The discussion is closed. You can participate in the discussion within 24 hours after the publication of the article.
To participate in the discussion
log in or register
loader
Chats
Заголовок открываемого материала
Worldwide
InternationalEnglishEnglishMundoEspañolSpanish
Europe
DeutschlandDeutschGermanFranceFrançaisFrenchΕλλάδαΕλληνικάGreekItaliaItalianoItalianČeská republikaČeštinaCzechPolskaPolskiPolishСрбиjаСрпскиSerbianLatvijaLatviešuLatvianLietuvaLietuviųLithuanianMoldovaMoldoveneascăMoldavianБеларусьБеларускiBelarusian
Transcaucasia
ԱրմենիաՀայերենArmenianАҧсныАҧсышәалаAbkhazХуссар ИрыстонИронауОssetianსაქართველოქართულიGeorgianAzərbaycanАzərbaycancaAzerbaijani
Middle East
Sputnik عربيArabicArabicTürkiyeTürkçeTurkishSputnik ایرانPersianPersianSputnik افغانستانDariDari
Central Asia
ҚазақстанҚазақ тіліKazakhКыргызстанКыргызчаKyrgyzOʻzbekistonЎзбекчаUzbekТоҷикистонТоҷикӣTajik
East & Southeast Asia
Việt NamTiếng ViệtVietnamese日本日本語Japanese中国中文Chinese
South America
BrasilPortuguêsPortuguese
NewsfeedBreaking
19:12 GMT'Political Hot Potato'? Media Ponders on Cancellation of UK Queen's Visit to Northern Ireland
19:07 GMTMan Kills His Elderly Grandfather With Axe After 'God Told Him to Do it,' Media Says
19:03 GMTFrench Presidential Hopeful Slammed for Waving Gun at Journalists
19:01 GMT‘No Business Being There’: Meghan McCain Revisits Rage at Ivanka, Jared for Attending Dad’s Funeral
18:48 GMTAfghan-Pakistan Border 'Equally Unstable' as LOC, Will 'Come & Bite Them', Warns Indian Army Chief
18:46 GMTTrump's New Social Media Platform 'TRUTH' Hacked By Pranksters
18:39 GMTRape Case Involving Afghan Man Prompts Leaders to Call for Halt to Resettlement in Montana
18:38 GMTExplosion at Power Plant Causes Major Blackout in Afghan Capital
18:35 GMTIs Zuck Stuck? Facebook Facing New Challenges & Rebranding Unlikely to Save the Day, Observers Say
17:55 GMTGerman Defence Chief Warns Europe Against ‘Detaching From America’ & NATO in Wake of Afghan Debacle
16:52 GMTEMA Says Sputnik V Still Under Review, Gives No Comments on Assessment Timeline
16:41 GMTPutin Calls NATO Military Presence in Ukraine a Real Threat to Russia
16:25 GMTBiden Was Right to Withdraw US Troops From Afghanistan, Putin Says
15:52 GMTUK’s Johnson Calls for 'Fast' Solution to Issues With N. Ireland’s Post-Brexit Protocol
15:40 GMTPutin Calls COVID-19 Pandemic Another Reminder of How Fragile Global Community Is
15:37 GMTPentagon: US Army, Navy Hold 3 Successful Tests in Bid to Advance Hypersonic Weapons' Development
15:33 GMTScottish Power Boss Slams 'Regressive' Price Cap, Warns of Energy Supplier 'Massacre' in UK
15:33 GMTEpstein's Ranch Had Computer Rooms 'The Size of Houses' to Spy on Guests, Claims Alleged Victim
15:32 GMTWHO Studying Sweden's, Denmark's Data on Side Effects of Moderna Vaccine
15:25 GMTPutin: Battle for Equal Rights in West Turning Into Dogmatism Bordering on the Absurd