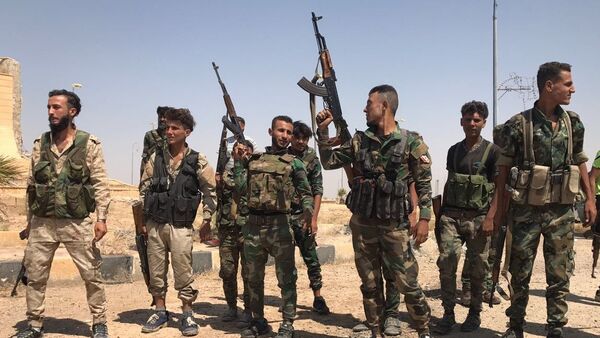 BEIRUT (Sputnik) - The Syrian government troops, with the support of the allied forces, pushed militants of the Jabhat Fatah al Sham terror group (formerly known as Jabhat al-Nusra or Nusra Front, banned in Russia) from eight villages and settlements in the north of Hama province, a Syrian military source told Sputnik on Saturday.

"Yes, the army with the support of artillery managed to regain control of the villages and settlements of Atshan, Al-Hamdaniyah, Al-Slumiyah, Abu-Omar, Nasiriyah, Tilal Zaatari, Morek and Jadvaiyah," the source said.

During the offensive, the terrorists' armaments and the firing positions were destroyed.

Pentagon Chief: US-Russia Dialogue Persists Across Syria Demarcation Line
On Friday, Syrian government forces have pushed terrorists from the strategically important Abu Dali settlement in Hama province. Abu Dali is located at the traffic crossroads connecting several provinces. The militants, in turn, used this settlement as a distribution point on the supply route between the provinces of Hama and Idlib.

Syria has been engulfed in a civil war since 2011, with the government forces fighting numerous opposition factions and terrorist groups.