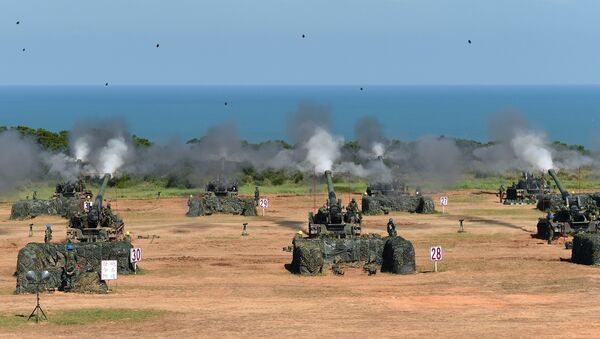 © AFP 2021 / SAM YEH
Subscribe
Taiwanese President Tsai Ing-wen announced on Friday that the military aggression of the mainland has reached new heights and that her country would increase its military spending to meet the intensifying security challenge.

"China's military activities don't only impact the situation in the Taiwan Strait, but also in all of East Asia… This is not a problem being faced alone by Taiwan," Tsai told reporters during a Friday press conference, standing on a stage adorned with two model fighter jets.

"All countries in this region who want to see peace and stability, have a consensus… and China can't ignore this, that cross-strait issues absolutely can't be resolved through military force but through peaceful means," Tsai added.

But just because peace is the only path to resolution doesn't mean Taiwan will curb military spending — quite the opposite, she said, announcing a defense spending increase in 2018. The exact amount, or where the money will go, has yet to be determined.

"Over the past year, the morale of our military is steadily improving, support for our military is also continuously increasing. This is the most gratifying thing since I've become president. I hereby solemnly announce that our annual defence budget will grow steadily within a reasonable range. Building our own defences will no longer be a slogan, but the daily task we must fully realise."

During an October visit to Hawaii, Tsai announced that a 2 or possibly 3 percent increase in defense spending would be implemented in the near future. She also hinted that her country would ink additional weapons purchases with US military contractors. Taiwan is a top buyer of US weapons, having purchased more than $60 billion's worth in the last 25 years.

Tsai reiterated that claim in her speech, adding that Taipei would eye more advanced weapons from Washington. However, she insisted the weapons were only for self-defense and would not be used to provoke Beijing.

Hostilities between China and Taiwan flared after the 2016 election victory of Tsai and her Democratic Progressive Party (DPP), ending several years of detente. Unlike her immediate predecessors, Tsai has been unwilling to publicly endorse the 1992 Consensus, a cross-strait agreement affirming that there is only one China. (Naturally, Beijing and Taipei disagree on which of their governments is the legitimate one.)

The DPP's line is more attuned to the realities of the situation: China and Taiwan are in practice, separate, sovereign nations. But China has declared any moves on Taiwan's part toward formal independence a red line, even hinting at military action should Taiwan hold an independence referendum.

Earlier in December, the Taiwanese Defense Ministry released a white paper claiming that the Chinese Air Force had conducted 16 provocative military exercises in which they buzzed Taiwan's airspace in 2017.

Beijing in the past referred to the exercises as routine and told Taiwan (and Japan, which also had its airspace buzzed) to "get used to it."

000000
Popular comments
President Tsai Ing-wen may refuse to recognize the 1992 Consensus but she eagerly supports President Trump's demand for more military spending. Although Taiwan is not a sovereign-state allied to USA, this luckless island is indebting itself through US military purchases to be a loyal vassal-state paying interest over many generations.
Ambricourt
29 December 2017, 22:45 GMT
000000
Cooler Heads - What an absurd assertion from Patrick Henry. He knew little about liberty and nothing about death. But like the other cautious revolutionaries he was convinced , as a card-carrying freemason, of protection under the dome of Enlightenment...
Ambricourt
30 December 2017, 00:03 GMT
000000
Newsfeed
0
New firstOld first
loader
LIVE
Заголовок открываемого материала
Access to the chat has been blocked for violating the rules . You will be able to participate again through:∞. If you do not agree with the blocking, please use the feedback form
The discussion is closed. You can participate in the discussion within 24 hours after the publication of the article.
To participate in the discussion
log in or register
loader
Chats
Заголовок открываемого материала
Worldwide
InternationalEnglishEnglishMundoEspañolSpanish
Europe
DeutschlandDeutschGermanFranceFrançaisFrenchΕλλάδαΕλληνικάGreekItaliaItalianoItalianČeská republikaČeštinaCzechPolskaPolskiPolishСрбиjаСрпскиSerbianLatvijaLatviešuLatvianLietuvaLietuviųLithuanianMoldovaMoldoveneascăMoldavianБеларусьБеларускiBelarusian
Transcaucasia
ԱրմենիաՀայերենArmenianАҧсныАҧсышәалаAbkhazХуссар ИрыстонИронауОssetianსაქართველოქართულიGeorgianAzərbaycanАzərbaycancaAzerbaijani
Middle East
Sputnik عربيArabicArabicTürkiyeTürkçeTurkishSputnik ایرانPersianPersianSputnik افغانستانDariDari
Central Asia
ҚазақстанҚазақ тіліKazakhКыргызстанКыргызчаKyrgyzOʻzbekistonЎзбекчаUzbekТоҷикистонТоҷикӣTajik
East & Southeast Asia
Việt NamTiếng ViệtVietnamese日本日本語Japanese中国中文Chinese
South America
BrasilPortuguêsPortuguese
NewsfeedBreaking
19:17 GMTAmerican Express Reportedly Down in US
19:12 GMT'Political Hot Potato'? Media Ponders on Cancellation of UK Queen's Visit to Northern Ireland
19:07 GMTMan Kills His Elderly Grandfather With Axe After 'God Told Him to Do it,' Media Says
19:03 GMTFrench Presidential Hopeful Slammed for Waving Gun at Journalists
19:01 GMT‘No Business Being There’: Meghan McCain Revisits Rage at Ivanka, Jared for Attending Dad’s Funeral
18:48 GMTAfghan-Pakistan Border 'Equally Unstable' as LOC, Will 'Come & Bite Them', Warns Indian Army Chief
18:46 GMTTrump's New Social Media Platform 'TRUTH' Hacked By Pranksters
18:39 GMTRape Case Involving Afghan Man Prompts Leaders to Call for Halt to Resettlement in Montana
18:38 GMTExplosion at Power Plant Causes Major Blackout in Afghan Capital
18:35 GMTIs Zuck Stuck? Facebook Facing New Challenges & Rebranding Unlikely to Save the Day, Observers Say
17:55 GMTGerman Defence Chief Warns Europe Against ‘Detaching From America’ & NATO in Wake of Afghan Debacle
16:52 GMTEMA Says Sputnik V Still Under Review, Gives No Comments on Assessment Timeline
16:41 GMTPutin Calls NATO Military Presence in Ukraine a Real Threat to Russia
16:25 GMTBiden Was Right to Withdraw US Troops From Afghanistan, Putin Says
15:52 GMTUK’s Johnson Calls for 'Fast' Solution to Issues With N. Ireland’s Post-Brexit Protocol
15:40 GMTPutin Calls COVID-19 Pandemic Another Reminder of How Fragile Global Community Is
15:37 GMTPentagon: US Army, Navy Hold 3 Successful Tests in Bid to Advance Hypersonic Weapons' Development
15:33 GMTScottish Power Boss Slams 'Regressive' Price Cap, Warns of Energy Supplier 'Massacre' in UK
15:33 GMTEpstein's Ranch Had Computer Rooms 'The Size of Houses' to Spy on Guests, Claims Alleged Victim
15:32 GMTWHO Studying Sweden's, Denmark's Data on Side Effects of Moderna Vaccine