Lockheed Martin has an interesting new graphic posted on its website showing its F-35 converting from stealth mode to “beast mode,” in which it can expand to hold 14 beyond-visual-range missiles - 10 more than normal.

There's one problem, though: no such plane or mode exists.

The "beast mode" F-35 depicted on the company's website shows the aircraft carrying 14 AIM-120 AMRAAM missiles and a pair of AIM-9X Sidewinder missiles for air superiority missions. The only problem is that "such a plentiful missile carrying configuration" does not actually exist, the Drive reported Thursday. 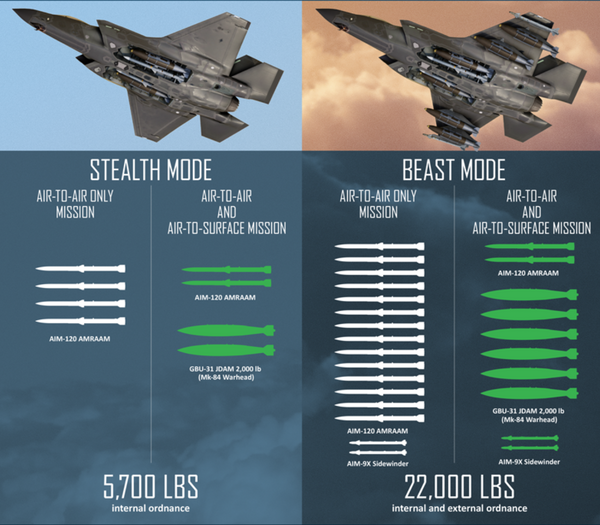 The F-35 packs four air-to-air missiles in its internal weapons bay. At some point in the future, the military plans to increase internal air-to-air missile capacity to six, but even plans for this modest expansion are tentative, the Drive notes. "Not only has this configuration not been tested, but as far as we can tell it isn't even slated for development in the foreseeable future," the report states.

The F-35 was touted as a cost-effective, powerful fighter jet more sophisticated than any jet any adversary could build for the next two decades. "But it's turned out to be none of those things," Michael Hughes, professor of finance at Francis Marion University, wrote in a June essay for The Conversation.

"As a retired member of the US Air Force and current university professor of finance who has been involved in and studied military aviation and acquisitions, I find the F-35 to be one of the greatest boondoggles in recent military purchasing history," Hughes said.

The Pentagon still continues to pour massive sums of money into the program and plans to produce more than 2,000 planes before phasing the aircraft out in 2070. "Essentially, the Pentagon has declared the F-35 ‘too big to fail,'" Hughes said.

"They have made the plane an inelegant jack-of-all-trades, but master of none — at great expense both in the past, and apparently, well into the future," he said.

Before Lockheed Martin explores a "beast mode," it might consider getting the F-35 to work in normal mode, first.