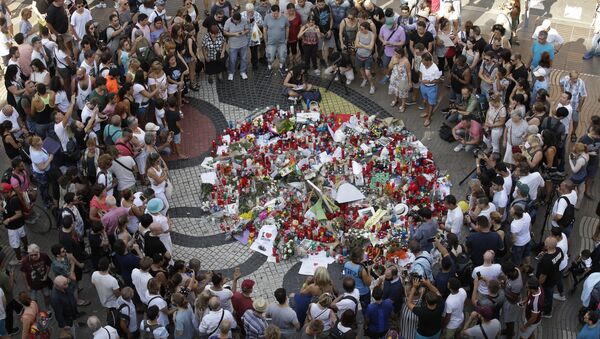 MOSCOW (Sputnik), Valentina Shvartsman - In 2017, the jihadist terrorism in Europe has taken a new shape, as a wave of vehicle rampages and stabbing massacres hit not only Europe’s largest cities, such as Stockholm, Manchester, London, Barcelona and Paris, but also its once quiet and peaceful towns, such as Finland’s Turku.

In an attempt to mask its losses in Syria and Iraq, the Daesh terror group (also known as ISIL, banned in Russia) incites lone actors and groups to change their modus operandi toward attacks requiring lower organizational capabilities in order to maximize their number and overall impact.

Furthermore, Daesh claims responsibility for every terrorist attack occurring in the West, even though police often do not find any direct links to the terrorist group.

There are still no exact statistics related to the total number of this year’s failed, foiled and completed terrorist attacks in Europe, or the methodologies behind each incident and the average age of attackers.

However, a certain pattern was seen with the attacks that took place. Specifically, four out of eight major terrorist attacks in Europe — London’s Westminster Bridge, London Bridge, the Borough Market attacks, as well as the massacres in the Spanish cities of Barcelona and Cambrils — involved either only vehicles or vehicles followed by stabbing attacks and claimed the lives of 29 people. The terrorist attack in Finland’s southwestern city of Turku, which killed two people, made use of a bladed weapon.

Meanwhile, only two major terrorist attacks, namely at the Manchester Arena and Paris’s famous Champs-Elysees, were carried out with the use of “traditional means” – an explosive device and firearms, killing 23 people.

The terrorists have changed their methodology, because both vehicles and knives proved to be more efficient in attacks perpetrated in 2016, especially the ramming massacre in France’s Nice, David Otto, the founding director of TGS Intelligence Consultants Ltd. and the founder of the UK-based Conflict Resolution Programme – Step In Step Out (SISO), told Sputnik.

“The Nice July 14th Bastille Day truck ramming attack became a copycat reference point to terrorists in Europe. They quickly learned that this ‘man & van’ tactic, which ISIL has promoted on its ‘Do it yourself’ magazines, was very effective in unsuspecting crowded places, required very little planning and preparation, extremely cheap to rent a van and use instantly with a knife that is available in every household,” Otto, who also works as a senior counterterrorism advisor for Global Risk International, said.

At the same time, the spike in vehicle and stabbing attacks could reflect limited access to more sophisticated means for mounting a terrorist attack, such as firearms and components for explosive devices. Therefore, changes in the terrorists’ approaches could in a way indicate the efficiency of “traditional” counterterrorism policies, Dr. Julian Richards, co-director of the Centre for Security and Intelligence Studies at Buckingham University (BUCSIS), told Sputnik. 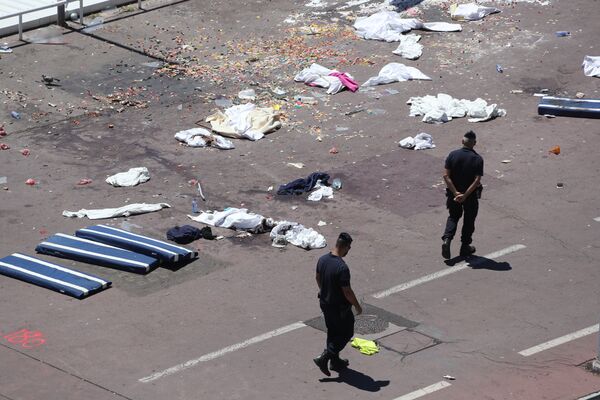 French gendarmes walk past clothes and mattresses at the site of the deadly attack on the Promenade des Anglais seafront in the French Riviera city of Nice on July 15, 2016, after a gunman smashed a truck through a crowd celebrating Bastille Day, killing at least 84 and injuring dozens
© AFP 2022 / Valery HACHE

“There is the practical consideration that sophisticated bomb and gun attacks are still very difficult to execute in well-policed states without being discovered, so less sophisticated attacks have a chance of slipping under the radar. In a strange sense, the shift towards these types of attacks could be evidence of the strength of traditional counter-terrorist measures,” the expert noted.

The attacks in Europe also revealed a surge in online recruitment by the terrorist organizations, in particular, via encrypted social networks. A number of attacks were perpetrated by lone wolves, people who are not directly recruited by terrorist groups, but merely inspired by online jihadist propaganda.

“The Internet has given Daesh an avenue to innovate on how it recruits and what message it puts on its platforms. Recruitment has become more hybrid in nature. Most times it begins online and then it moves offline or vice versa,” Otto said.

The wave of terrorism in Europe coincided with the outbreak of the migration crisis, which is raising major concerns about the European Union’s refugee and external border security policies. However, Richards said it should be noted that most attacks in 2017 were perpetrated by second- and third-generation Muslim migrants in Europe.

“Most of the recent attacks in EU states have not been committed by recent migrants, but by existing citizens who were born and brought up in Europe. … Most of the migrants who have come to Europe recently have come to flee terrible economic and political situations and are mostly just interested in being safe and making a new life for themselves. In some ways, these people are likely to be even less radical than other groups in our societies,” the expert said.

The growing number of terrorist offenses in Europe coincided with the defeat of the militant groups in Syria, where the government troops supported by the Russian Aerospace Forces managed to completely liberate the country from Daesh with the Russian Defense Ministry declaring on December 7 that there was "no settlement or district in Syria, that is controlled by Daesh."

Three days later, after Iraqi troops re-established control over their border with Syria, Iraqi Prime Minister Haider Abadi declared that the country's war against Daesh was over.

READ MORE: Daesh Forces Dwindling By the Day in Syria and Iraq

The IHS Markit noted in its 2017 “Islamic State [Daesh] returnees pose threat to Europe” report that the terror group’s losses in the Middle East were resulting in the gradual return of tens of thousands of foreign terrorist fighters who had left Europe for the Middle East. This movement, according to the think tank, was what sparked a wave of terrorism across the continent.

“As the Islamic State [Daesh] increasingly loses territory, more fighters will seek to return to their home countries. This will likely be motivated by one of two factors that are germane to the security threat that they pose: some will be demoralised and will leave because their fortunes have changed, while others will be dispatched back to Europe as part of the Islamic State's strategy of moving from holding territory to insurgency,” the report read.

IHS Markit experts went on to say that growing anti-Muslim sentiment would further drive returnees to commit acts of terrorism.

“Because of the number of foreign fighters returning to their home countries, it is likely that there will be an increase in the number of lone actor-type attacks taking place in European cities,” the report concluded.

Ways to Address Wave of Attacks

Following the deadly attacks in London and Barcelona, the UK government has begun developing specific measures that will tighten control over car and van rentals. In August, media reported that UK ministers and police were working to tackle the surge of ramming attacks by requiring rental companies to disclose all information about people who rent their vehicles, including names, addresses and financial details.

However, some experts doubt whether such a strategy will prove effective. 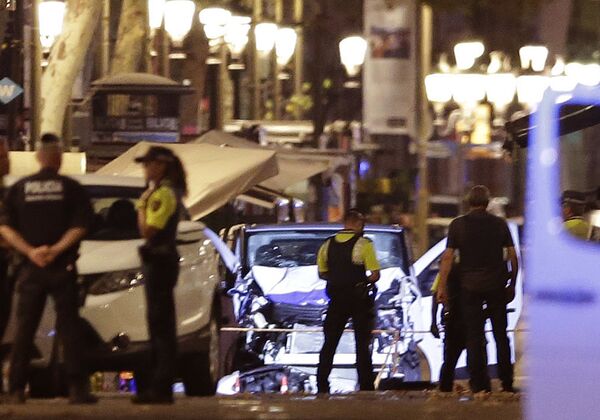 Police officers stand next to the van involved on an attack in Las Ramblas in Barcelona, Spain, Thursday, Aug. 17, 2017.
© AP Photo / Manu Fernandez

“You can protect some significant crowded places, monitor hire van companies, restrict the age of those who can buy knives, but it will have little effect on this tactic. Even when security services react to these attacks, the damage has already been done and success achieved,” Otto told Sputnik.

Another key aspect the EU authorities should focus on is monitoring individuals who return to Europe after visiting war zones in the Middle East, where they could have possibly come into contact with terrorists, according to Otto.

“When Daesh got hold of territory and encouraged Muslims all over the world to go and join the Caliphate in Raqqa to support the building of the so-called Islamic State, most EU countries went to sleep and failed to project the implications of failing to implement effective measures that would have prevented hundreds of men, women and families from traveling to Daesh-controlled territories in Iraq and Syria,” the expert stressed.

According to Europol’s “Terrorism Situation And Trend Report (TE-SAT) 2017,” even though the number of people going to the Middle East is dropping amid Daesh military defeats, it is expected that the number of returnees will rise and subsequently contribute to jihadist movements in Europe.

Otto added that while visiting conflict zones, individuals are not only encouraged to carry out a terrorist attack upon their return to Europe, but also trained to do so.

“Those who succeeded to sneak in and out of the EU obtained training and specifically returned to their familiar environment via open borders to perpetrate attacks like that seen in the UK Manchester Arena bombing by Salman Abedi,” Otto said.

Richards noted that another key focus of the EU counter-terrorism strategy should be preventing the radicalization of Muslim populations. According to the expert, “a huge amount of research and policy” has looked into the reasons behind the emergence of so-called homegrown terrorism since the 2000s, but the issue appeared to be “extremely complicated and multi-faceted.”

“Some of it has almost certainly to do with levels of integration of Muslims communities within EU states, and factors to do with discrimination and deprivation. But there also appear to be factors associated with generational shifts in ideology between first and later-generation migrants. … We are not yet at a stage where we have all the answers,” the expert said.

Otto suggested that EU governments should focus not only on eradicating radical Islam, but on training and educating imams that would preach a “non-violent” version of the religion and therefore counter extremist propaganda.

“To directly tackle the Jihadist ideology requires authoritative evidence from well-trained Imams that the ideology which Daesh and others promote as ‘true Islam’ is indeed badly wrong. Then you need an alternative ideology that will replace the wrong ideology,” Otto said.

The expert noted that Islamic radicalization was also linked to the problems Muslim populations were experiencing across Europe, such as ethic and religious discrimination and assault.

“Governments must learn to tell better stories online to counter what Daesh says and to show evidence offline by taking measures that promote justice, equality and respect for sovereignty, human dignity irrespective of one’s religion or race. … Governments should make the internet their greatest strength rather than allow Jihadism to turn it into a state’s worst nightmare. For what goes on online is a direct reflection of what happens in the streets. Fix the streets and the terrorist online messages will be exposed vividly,” Otto stressed.

The fear exaggerated by terrorist attacks amplifies an opposite extremist trend among EU citizens – Islamophobia – and the Finsbury attack is a clear example of that. Therefore, growing anti-Muslim sentiment is likely to further fuel radicalization of Muslim youth who may give into extremist ideology easier when faced with resentment and discrimination in their home countries. This is a vicious cycle that Europe has yet to break.

The views and opinions expressed by the experts in this article do not necessarily reflect those of Sputnik.