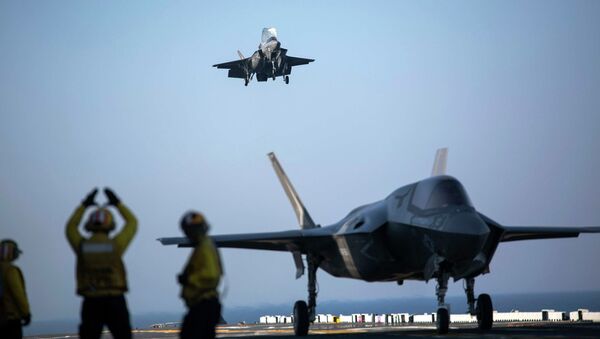 The South Korean and Japanese governments are considering buying Lockheed Martin’s F-35 aircraft and helicopter-carrier variant, the F-35B, in addition to major orders of F-35A jets already in the pipeline.

"I understand that the top military brass has recently discussed whether they can introduce a small number of F-35B fighters and operate them aboard the new ship that has already been deployed and one to be additionally built," a South Korean military source told Yonhap News Agency December 25.

The F-35B's short takeoff and vertical lift capability makes it a better fit for naval vessels with limited real estate. The fifth-generation jets were designed for US Marine Corps amphibious assault ships, which have less room to take off and land than the US Navy's aircraft carriers and which lack the powerful catapults that launch planes at take-off speeds.

Seoul allocated approximately $6.7 billion for 40 F-35As in 2014 and is reportedly considering buying another 20 in the A-variant, the traditional runway configuration of the aircraft. Acquiring F-35Bs is contingent upon a review of whether the South Korean navy's largest vessels, its Dokdo-class amphibious assault ships, can undergo deck renovations to adapt to fighter jet operations. South Korean and Japanese amphibious assault ships were initially designed for helicopter operations.

The first Dokdo-class vessel was commissioned in 2005. The South Korean Defense Acquisition Program Administration announced the construction of a second Dokdo-class ship in late April.

"The idea [to add F-35Bs] is being weighed in light of maximizing the strategic value of the vessel's capabilities," the defense official told Yonhap News Agency.

The Japanese government has also started to consider F-35Bs for the Japanese Maritime Self-Defense Force's Izumo-class "helicopter destroyers," which the JMSDF uses in a similar manner to helicopter carriers, the Japan Times reported December 25.

On Tuesday, Japanese Defense Minister Itsunori Onodera told reporters that the country will "constantly review" its defense capabilities "from various perspectives," but dismissed F-35B acquisition plans as mere speculation. "No concrete examination is under way on the introduction of [the] F-35B or remodeling of Izumo-class destroyers," Onodera told reporters.

Article 9 of Japan's postwar constitution bans Tokyo from maintaining an offensive military force. Seth Cropsey, a senior fellow at the Hudson Institute, told CNBC Thursday that "the F-35 can be considered both a deterrent and also carry the fight to a potential adversary."