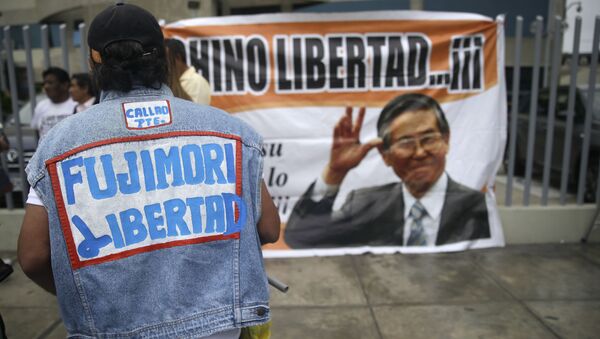 Fujimori was deposed in a soft coup in 2000 when the government turned against him, and in 2007 he was sentenced to six years in prison for ordering illegal searches and seizures. His sentence was upped to 25 years in 2009 on charges of human rights violations.

Fujimori maintains a controversial legacy in Peru: while he defeated leftist guerrilla groups such as the Shining Path, his methods were brutal and left 70,000 Peruvians dead in a country of 21.8 million, according to World Bank statistics. While he restored the country's macroeconomic stability, he also embezzled an estimated $600 million.

"I think this is a very bad thing for Peru and it's one more sign for the right-wing turn that's happening on the continent in general," said Alvarado. "l I think that the decision that the current president made is a very dangerous thing to do, because it's definitely going to polarize the situation further. Actually, the government has already started losing support — some of the secretaries have left."

Kiriakou brought up a Peruvian law that prohibits presidential pardons for those convicted of murder or kidnapping. However, the law has an exception for those suffering from incurable illness or severe mental disorders, and Kiriakou asked if it were possible that this were the case for Fujimori.

"It's a possibility, but I doubt it for many reasons," replied Alvarado. "One: this pardon has been rejected several times, and also the current president said that he has terminal illness — but in an official communique that they released, they didn't name any disease or illness or anything specific. Also because of the timing: this pardon passing through without being discussed with any member of the government, just a few days after the current president was almost taken out of office — it's very, very suspicious."

Kiriakou then asked Smolarek what sort of legacy Fujimori was likely to have in Peru, as many in the country still defend the events of his 10-year presidency. "I think he's going to go down in history as as an extremely brutal and corrupt dictator," said Smolarek.

"The amount of killing that was carried out under his leadership, the extremely brutal counterinsurgency campaign against the Shining Path guerrilla movement and the Tupac Amaru revolutionary movement, there were effectively death squads that were set up to hunt down people who were suspected of having sympathies towards towards these groups or towards any type of dissident political ideology."

"He was convicted for for taking millions of dollars in bribes," added Alvarado. "He was convicted for corruption, for violations of human rights, but there's so many other things. There's also the forced sterilization of thousands of indigenous women in Peru during his government, for example. I think the number is around 200,000 or 300,000 indigenous women that were forcibly sterilized."

The conversation then turned to Fujimori's daughter Keiko, who was involved in the latter days of her father's administration and has since risen to the top of the country's politics, narrowly losing the 2016 election to Kuczynski. Kiriakou wondered how someone with such a toxic last name could find such success in Peruvian politics.

"I don't think I have a solid answer to that, but I can speculate a little bit," said Alvarado. "I think that it has to do with the corruption that has happened in other [Peruvian] governments, along with the fact that these kind of governments have developed a very broad network of clientelism with the people who are in the most need."

"So even though Fujimori is very, very unpopular and considered a dictator by many in Peru, there's also a lot of people who hold, as you mentioned before, Fujimori as the savior of the country from the guerrillas, someone who brought economic stability. Keiko has been able to capitalize on that."