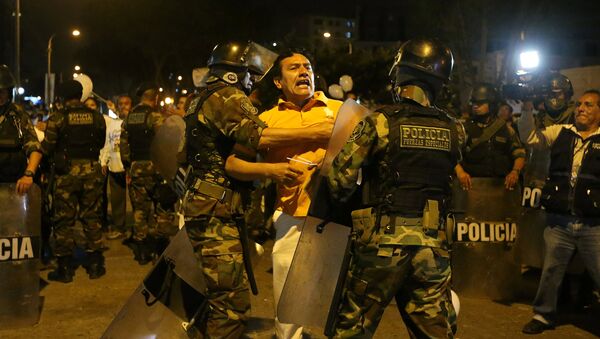 The decision to pardon former Peruvian President Alberto Fujimori has not added to national stability and will not lead to national reconciliation, Miguel Angel Canales, president of the Association of Relatives of Political Prisoners, of the Missing People and Victims of Genocide of Peru, told Sputnik.

Former Peruvian President Alberto Fujimori, sentenced to 25 years in prison for corruption and crimes against humanity, including ordering massacres by death squads, was pardoned by incumbent President Pedro Pablo Kuczynski on December 24, prompting a heated debate and a wave of dissatisfaction among Peruvians.

"This measure does not solve the [country's] main problems and does not lead to the national reconciliation the [Peruvian] government is talking about," Miguel Angel Canales, president of the Association of Relatives of Political Prisoners, of the Missing People and Victims of Genocide of Peru, told Sputnik Mundo. "The amnesty should cover civilians, military and police, not Fujimori supporters alone. Both groups [Fujimori and Kuczynski] are responsible for the implementation of neo-liberal policies in Peru. They have never sought to solve the problems of [common] people."

Fujimori was granted amnesty after his supporters put forward and then declined the proposal for an impeachment of the incumbent president.

The bid for impeachment of Kuczynski was put forward over the allegations of corruption and receiving money from the Brazilian construction company Odebrecht when the present Peruvian leader was the minister of former president Alejandro Toledo between 2001 and 2006.

On December 21 the president survived the impeachment vote with 78 representatives supporting the measure and 19 against. The numbers fell short of the necessary 87 votes to impeach Kuczynski.

That became possible after 10 members of the hard-right Popular Force party, led by Fujimori's daughter Keiko, abstained at the last minute instead of voting in favor of the measure, Simeon Tegel of The Washington Post reported last Friday.

It appeared symbolic that Alberto Fujimori's son, Kenji, who also abstained from voting, was moved to tears when it became known that Kuchinsky would not be removed from power.

Political Payoff? Peru’s President Pardons Ex-Strongman Fujimori
On December 24 Kuczynski announced that he granted amnesty to Fujimori. According to the presidential administration, the former Peruvian leader was released for health reasons. A day earlier, Fujimori was admitted to the intensive care unit at the Centenario Clinic in Lima. After the news, on December 26, the former leader of the Latin American country was transferred to an ordinary chamber.

In a video posted on his Facebook page the former Peruvian leader asked for forgiveness.

"I am aware that the results during my government on one side were well received, but I recognize that I have also disappointed others, and I ask them to forgive me with all my heart," he said, as quoted by CNN.

Fujimori served as a president of Peru from 1990 to 2000. Between 1980 and 2000 more than 15,000 people had gone missing during an internal armed conflict in Peru. More than 4,000 common graves still remain undiscovered. Apparently therefore, the pardoning of the former leader of the country caused an ambiguous reaction within the Peruvian society and provoked mass protests in Lima and other cities.

In response, Kuczynski addressed the protestors, urging them to "turn the page" and accept Fujimori's amnesty.

The views and opinions expressed by Miguel Angel Canales are those of the speaker and do not necessarily reflect those of Sputnik.