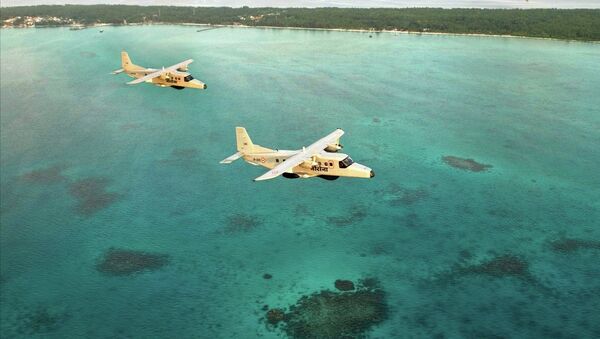 © Photo : Indian Navy
Subscribe
India’s $2 trillion aviation market is poised to expand further with a push on regional connectivity. India’s HAL has started rolling out the civilian version of the Dornier -228, which is set to compete with global manufacturers eyeing a big pie of the booming industry.

New Delhi (Sputnik) — The Dornier 228 aircraft manufactured under license by Hindustan Aeronautics Limited (HAL) has become the first civilian aircraft manufactured in India to get the approval of the country's aviation regulator. The Directorate General of Civil Aviation (DGCA) has given a thumbs-up to the civilian version of the Do-228, which was originally produced by German firm Dornier GmbH and was used as a military aircraft in India. HAL later bought a license from the German company and started locally manufacturing the aircraft.

After serving the Indian armed forces for over three decades, the twin-turboprop Dornier Do-228 is all set to serve India's booming civilian aviation sector. The current government led by Narendra Modi has set an ambitious regional connectivity target and this 19-seater high wing aircraft with retractable tricycle landing gear is most likely to be favored by local airliners.

Indian Aviation Market Third Fastest Growing After Russia, China
It is being speculated that the Do-228 will compete with France-based turboprop aircraft manufacturer ATR in the Indian market as HAL claims that the Do-228 would cost approximately $10 million per unit as compared to the ATR that comes at $24 million per unit. Low-cost Indian carriers that usually lease aircraft instead of buying them, to ensure low operational expenses, may have no qualms investing in cheaper aircraft like the Do-228. The Do-228 has a maximum cruise speed of 428 kilometers per hour and a range of 700 km.

The Indian aviation sector is growing at an average annual rate of 15-20 percent. In this backdrop, there is a strong demand for more airplanes. US manufacturer Boeing expects the world's fastest-growing aviation market to order as many as 2,100 planes worth $290 billion over the next 20 years; mostly (1,780) in the 90-seater to the 230-seater category. However, with regard to infrastructure capacity and passenger availability, low-cost carriers, mainly new entrants, may choose an aircraft having a lower operational expense with a smaller passenger capacity. India's biggest airline — Air India — also plans to purchase smaller aircraft having 20 to 49 seats and the Do-228 serves all the requirements.

"There is a market demand for at least 200 such aircraft and the government would conclude the contract with HAL once the first aircraft is rolled out," Jayant Sinha, India's minister of state for civil aviation, said recently.

Russian aviation industry keeps its grip on the Indian market
The Indian government's regional connectivity scheme is a highly ambitious plan wherein fares have been projected as low as $37 for one-hour of air travel to and from the remotest towns and villages. Currently, India has 450 airfields out of which only 75 are connected with scheduled commercial flights. Connectivity to the remaining 375 airfields is considered unviable by the airlines. The Narendra Modi-led government plans to provide a subsidy to airlines plying those routes under this scheme. As those routes will have fewer passengers, the airlines would require smaller aircraft with low operational and maintenance costs.

"The government, under a cost-effective air connectivity scheme, is working in a mission mode to provide affordable and sustainable air travel with access to various parts of India. The Do-228 will have a big business opportunity in this segment for next 10 years," an industry official told Sputnik on condition of anonymity.

"So, from 500 planes in the sky, we will have to go to about 2,000 planes," Jayant Sinha, India's minister of state for civil aviation, said.

Indian airlines have recently placed orders for over 920 planes as most of the low-cost domestic carriers like IndiGo, SpiceJet, and GoAir are set to expand their flights to the Middle East and the Asia-Pacific region.

Currently, the Indian aviation market is dominated by aircraft having a capacity of as many as 180 seats that are mostly manufactured by Boeing Co. and Airbus Group SE. Russian manufacturer Irkut has also been eyeing the Indian market with its Sukhoi Superjet-100 and MS-21 planes. Russia has proposed to manufacture the civilian planes in India to outdo its western rivals.