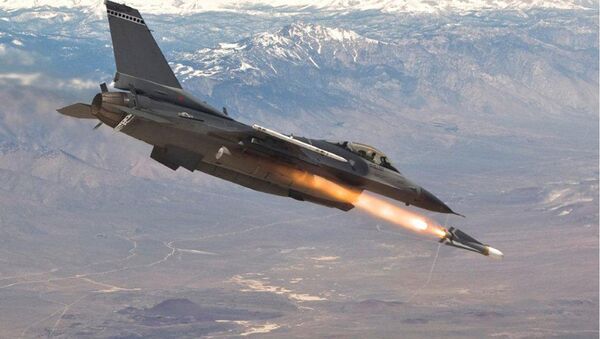 © Raytheon
Subscribe
International
India
Africa
A team of US Marines called in an airstrike to eliminate a suspected Taliban leader on December 20, but conflicting reports suggest the so-called Taliban shadow governor has been dead for a while.

Military.com's Hope Hedge Seck reported December 27 that Qari Fida Mohammad had finally been taken out after planning improvised explosive device and suicide attacks in Afghanistan for more than a decade.

"Through the work of the intelligence sections as well as the operations in here," US Marine Corps Capt. Brian Hubert explained to Military.com, "we were able to conduct a strike on [Mohammad] a few days ago."

"We're very familiar with the battlespace now," Hubert said, which makes sense given the US military's 16-year presence in Afghanistan. Mohammad was evidently first noticed by a US surveillance drone in a vehicle with some deputies and a cousin. "When he was well-positioned as a target, the Marines called in two [US] Air Force F-16 Fighting Falcons to execute the strike," the captain said.

However, another report suggests Mohammad may have died much earlier. According to Khaama Press, the largest news agency in Afghanistan, which cited Afghanistan's Ministry of Defense, Mohammad was apparently killed during an Afghan Air Force strike in Helmand province way back in May 2016.

"We're still not really fully aware of the exact ramifications of taking him out," USMC Col. Matthew Reid told Military.com in late December, discussing Mohammad's most recent apparent death, but claimed it was "a pretty big takedown."

Mohammad "was behind a lot of attacks against Marines back in the day — really high-profile attacks," Reid said.

Both strikes took place in the Marjah district of Helmand province, Afghanistan.

Yet another Khaama Press article dated December 22, 2017, reported that in fact it was just over the past three days that Mohammad had been killed.

"The provincial government media office in a statement said the prominent Taliban, Qari Fida Mohammad, was among several killed as fighter jets bombed the militants in Marjah district," Khamma Press reported, adding that "The statement further added that the airstrike was carried out at around noon time in the vicinity of Haji Baba roundabout."

The Taliban "is not showing signs of weakness," Max Abrahms, a counterterrorism expert at the Council on Foreign Relations, told Sputnik News in late October, adding that "the notion [the US is] going to turn the tide doesn't seem realistic."

Following diplomatic discussions between China, Pakistan and Afghanistan, "the Afghan government said that it will soon present a practical and engaging program of peace talks with the Taliban," Chinese Foreign Minister Wang Yi told reporters in Beijing December 26.

Earlier in December, US Air Force Brig Gen. Lance Bunch said the US and Afghan air campaigns against the Taliban had placed heavier emphasis on the Taliban's drug-running operation in Helmand, which serves as an "economic engine" for the Taliban network because of the substantial opioid production there.