Russian Naval Group to Be Permanently Deployed in Eastern Mediterranean 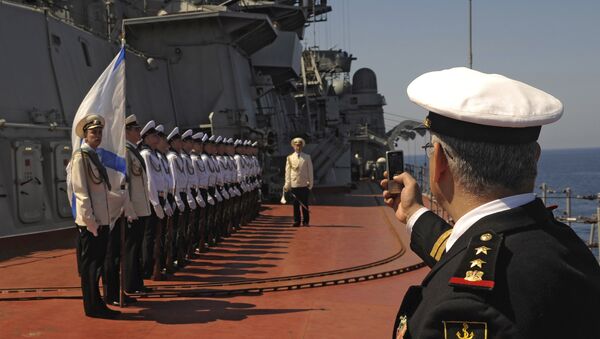 Russian General Staff Chief Army General Valery Gerasimov has unveiled plans for the Russian naval group in the eastern part of the Mediterranean Sea after the end of the military operation in Syria.

MOSCOW (Sputnik) — The Russian naval group will be permanently deployed in the eastern part of the Mediterranean Sea after the end of the military operation in Syria, Russian General Staff Chief Army General Valery Gerasimov told the Komsomolskaya Pravda newspaper in an interview issued on Wednesday.

"We will not withdraw… Our group of vessels is permanently operating in the Mediterranean now… And it will remain there on a regular basis," Gerasimov said.

Gerasimov also said that around 60-70 Russian drones are carrying out reconnaissance flights in Syria every day.

US Base in al-Tanf Fully Blocked by Syrian Troops
"Some 60-70 drones are carrying out flights in Syria every day. They are carrying out reconnaissance, there are drones that are fulfilling electronic suppression tasks and other missions," he said.

In October, Russian submarines made two strikes from Mediterannean sea with Kalibr cruise missiles on terrorists in Syria, according to the Russian Defense Ministry spokesman Maj. Gen. Igor Konashenkov. He also added added that the Russian air group and naval forces continued to support a Syrian government offensive aimed to defeat the terrorist group Daesh in the Euphrates River valley.