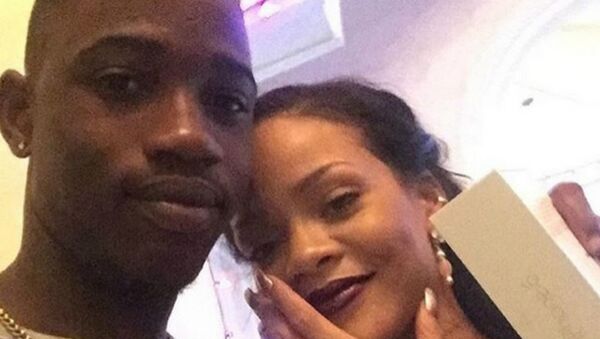 With Christmas season in full swing, the most sensitive issues like gun violence still hold relevance.

Rihanna has paid tribute on her Instagram page to her cousin, 21-year-old Tavon Kaiseen Alleyne, who was shot dead a day after Christmas.

He is said to have been attacked with a gun in the evening hours as he was walking on a path near his home in Lakes Close, Eden Lodge, St. Michael in Caribbean Barbados. A man passed by and shot him multiple times before fleeing the scene.  Alleyne was taken to hospital, where he later died.

The man was soon identified as Rihanna’s cousin, as the singer posted pictures featuring them together on her Instagram page. Here is one of them:

RIP cousin… can't believe it was just last night that I held you in my arms! never thought that would be the last time I felt the warmth in your body!!! Love you always man! 😢🙏🏿❤ #endgunviolence

"RIP cousin… can't believe it was just last night that I held you in my arms! Never thought that would be the last time I felt the warmth in your body!!! Love you always man!" she wrote adducing the hashtag #endgunviolence.

Gun violence has become a heart-wrenching issue for Barbados in recent years, with a shooting incident being registered almost every week. Barbados police have reported gun-related crimes on the island to spike by a staggering 57% this year as compared with 2016. The official figures show that of the 28 murders committed so far this year, 22 were gun-related.

With this in mind, the police have stepped up measures to halt the illegal possession of arms, with reports saying there was a 28% increase in the number of illegal firearms seized this year, and a 15 percent rise in the number of cases brought before the courts in the wake of anti-gun operations.

Public organizations are also increasingly calling for action. Following a spate of summer shootings, the "Spring Garden" case being just one of them, Barbadian media, namely the Barbados Advocate posted a number of editorials demanding that the "government get serious with the issue" and highlighting the importance of educating youth, as well as dealing with economic disparity as one reason for thriving crime. A discussion has been underway for years, the writer noted, though has yielded no results:

"There is no need for years of conversation. Attempts to curb it have obviously been inadequate, but that merely requires new actions, not inaction."

Amid vehement calls for the government's prompt action, the chief of Barbadian police reported that they hadn't enjoyed a pay hike for at least a decade.

"We shall cease requesting and start demanding our just due. We give of our best each day with no adequate remuneration and allowances, and therefore the year ahead will be one of demands for better remuneration and allowances for the rank and file of the Royal Barbados Police Force," President of the Barbados Police Association, Mervin Grace, said addressing a BPA's Annual General Meeting last month.

READ MORE: Why Are the US-Based Bandidos Gang Considered a 'Threat' to the Netherlands?