Thicker Than Water: Michael Flynn’s Brother Calls on Trump to Pardon Him 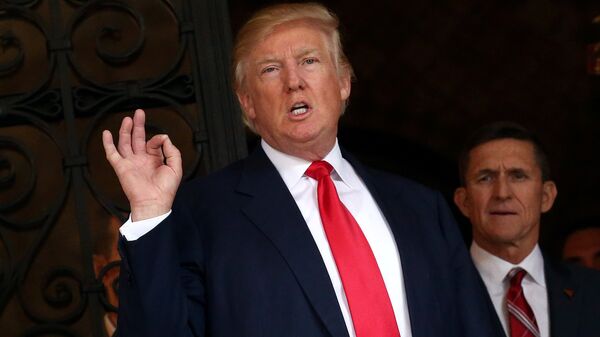 The brother of former National Security Adviser Michael Flynn called on US President Donald Trump via Twitter to pardon his sibling, who stands accused of making false statements to the FBI. The tweet has since been deleted.

"About time you pardoned General [Michael] Flynn who has taken the biggest fall for all of you given the illegitimacy of this confessed crime in the wake of all this corruption," Joseph Flynn tweeted at the president on Tuesday.

The tweet was in reply to one from Trump, complaining about the ongoing investigation into his history and personal dealings based on the still mostly unverified information in the infamous Steele dossier compiled on the dime of the Hillary Clinton campaign and the Democratic National Committee.

Joseph Flynn confirmed to Newsweek that he sent the tweet, although he deleted it shortly afterward. "I said it, and maybe he's listening," he said. "I stand by my tweet. This is all my personal opinion and I stand by it."

Flynn followed up with another more carefully worded tweet on the same subject: "Mr. President, I personally believe that a pardon is due to General Flynn, given the apparent and obvious illegitimacy of the manner in which the so called ‘crimes' he plead [sic] guilty to were extracted from him. I ask for quick action on this. Thank you and keep up the good work!"

Mr. President, I personally believe that a pardon is due to General Flynn, given the apparent and obvious illegitimacy of the manner in which the so called "crimes"he plead guilty to were extracted from him. I ask for quick action on this. Thank you and keep up the good work!

​Trump addressed the possibility of a pardon for Flynn earlier in December, saying he felt "bad" for the general, but he did not make any conclusive statements on the subject. "I don't want to talk about pardons for Michael Flynn yet," the president told reporters. "We'll see what happens. Let's see."

Also on Tuesday, reporters asked White House press secretary Sarah Huckabee Sanders about the possibility of a Flynn pardon. She said that such a thing had not been discussed before and that she didn't "feel that it's necessary until we get further down the the road and determine whether or not that's even something needed."

Joseph Flynn is also one of the chief organizers of a legal defense fund for his brother.

Lt. Gen. Flynn served as an adviser to the Trump presidential campaign in 2016 and was then appointed to the office of National Security Adviser upon Trump's ascension in January 2017.

But Flynn lasted in the post less than a month, being dismissed for allegedly misleading Vice President Mike Pence about the content of his conversations with then-Russian Ambassador to the US Sergey Kislyak. The White House reported that Flynn left over "trust issues," and that there was no suspicion of illegal activity on his part.

On December 1, Flynn pleaded guilty to "willfully and knowingly" making "false, fictitious and fraudulent statements" regarding his conversations with Kislyak. Flynn announced his full cooperation with the investigation, saving his son Michael G. Flynn from prosecution in the process.

While mainstream Trump opponents have called Flynn's admission proof of collusion between Russia and the Trump campaign team, the court found no issue with the contents of Flynn's conversations with Kislyak — conversations that focused on issues of US-Russia relations, such as cooperation on security matters and a recent package of sanctions signed by then-President Barack Obama against Moscow.

Flynn was acting in his capacity as incoming national security adviser, communicating with the ambassador from another nation on matters within the scope of his job. As such, he was not charged with any crimes regarding the conversation itself — only with lying about its contents to FBI investigators later on.

Flynn is the second person to be convicted since the Justice Department Special Counsel investigation began in May. On October 30, former Trump campaign adviser George Papadopoulos pleaded guilty to the same charge as Flynn.