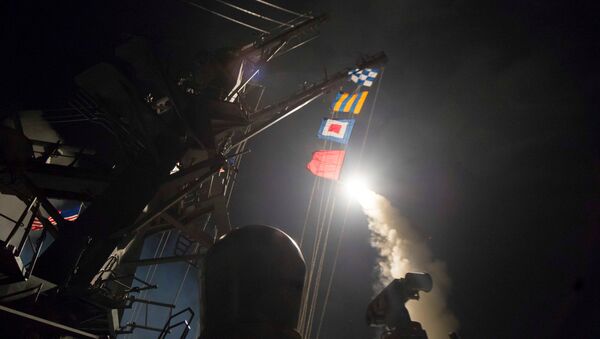 The US-led coalition has been conducting operations in Syria without either the government's consent or a UN mandate.

The US-led coalition has announced that it won't conduct operations on Syrian territory controlled by the government on the western side of the Euphrates River, Operation Inherent Resolve's Deputy Commander UK Maj. Gen. Felix Gedney said during a press briefing.

"We will continue to prevent conflicts with Russians, but we don't intend to continue operations in areas controlled by Assad," Gedney said.

According to Gedney, the US-led coalition forces allegedly saw Daesh fighters moving with impunity in the government-held areas of the country.

"We are seeing the movement of a limited number of militants westwards. They seem to be moving with impunity through the regime-held territory, showing that the regime is clearly either unwilling or unable to defeat Daesh within their borders," Gedney told reporters, adding that the coalition forces had seen Daesh fighters moving around areas near the US military base at al-Tanf in Syria.

"We are taking those individuals off the battlefield," Gedney said, calling on the Syrian government to clear the areas from Daesh under its control.

Further on, Gedney expressed doubts in the effectiveness of operations conducted by the Syrian government forces east of the Euphrates river.

"We’ve clearly seen a lot of operations by the regime forces, Russian-backed Syrian forces over to the east of the Euphrates River. We question some of the effectiveness of some of these operations," Gedney said.

The announcement by the coalition comes hours after Chief of the Russian General Staff Valery Gerasimov said that US explanations about its base in southern Syria's Tanf are still "unintelligible" after US Special Presidential Envoy for the Global Coalition to Counter Daesh Brett McGurk said that the coalition will maintain its presence in Syria to guarantee that the Daesh terrorists don't return to the liberated areas.

US Base in al-Tanf Fully Blocked by Syrian Troops
After several strikes by the coalition targeting the Syrian army near al-Tanf, Russian Foreign Minister Sergei Lavrov noted the illegal presence of the US-led coalition forces in the Arab Republic.

The US-led coalition of more than 70 members has been conducting military operations against Daesh in Syria, with the strikes not being authorized by the government of President Bashar Assad or the UN Security Council.