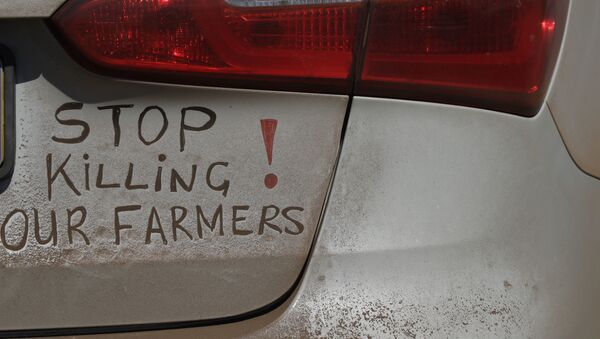 Severe attacks on farmlands and the community’s response are just one issue that reveals to what extent South Africa is experiencing violence, with some arguing there definitely is a racial pretext to it.

The South African police have long argued that an economic slowdown is the most important reason behind the latest multiple attacks on farmers, who are considered sufficiently well-off. There are voices, however, saying they are racially charged, adding that the area of Limpopo and others have historically been cultivated by predominantly white farmers.

One of the most recent widely reported cases occurred 6 months ago. At the time, Robert "Oki" Turner, 66, was beaten to death before his wife’s eyes on their isolated stretch of mountain land in South Africa's northeastern Limpopo province, where they moved 30 years ago.

"I miss him so terribly — it's just so hard," she said, sitting in front of the frail-care unit that has been her home since the attack at their farm, said Debbie Turner, the deceased’s wife, as reported by France24.

The Turners were targeted on June 14 after it grew dark when two armed men stormed their farm, beating Oki to death while in search for the key to the family’s safe.

AfriForum, a pressure group that advocates for rights of the country's nine-percent-strong white population, has called for a debate on the implications of farm murders, which have been shaking the country to core recently.

FARM MURDER:20:15 farmer went outside and was shot in the chest several times by 5 attacker's.all services are on scene. pic.twitter.com/lTNd8gU7SW

The issue has even prompted an online petition:

The Secretary-General of the United Nations: END FARM MURDERS IN SOUTH AFRICA — Sign the Petition! https://t.co/8WrSlKUECv via @Change

Many have been increasingly voicing their support from their Twitter accounts:

Do you think farm murders and attacks in South Africa is fake news? THEN OPEN YOUR EYES! WORLD! South Africa needs your help! *Sensitive Content* https://t.co/mwYCh8jktF via @HelpSAfrica

Some, though, have taken the news with a pinch of salt, saying the fact that white farmers are exclusively targeted is fake.

Political repercussions are also widely debated on Twitter, some users calling for farmers to defend themselves, citing the government’s incompetence to solve issues:

South Africa must realise that it’s govt does not have the competence to help stop farm murders. Time for farmers to organise themselves.

How many more farm murders must South Africa have before it realises that it cannot count on this useless anc govt for any support?

According to the best available statistics, farm murders have gained momentum since 2010-2011,  twenty years after the end of the apartheid. One of the reasons for that, as critics argue, is that white farmers live in comparative isolation from the rest.

The issue has promptly caused public unrest, with many white activists even taking to the streets earlier in November, demanding better protection of farmlands in South Africa.

South Africa's Police Service says 74 people were murdered on farms between April 2016 and March 2017, up from 58  the previous year.

That's broadly in line with figures collected by the Transvaal Agricultural Union (TAU). They rely on media reports, social media posts and tip-offs from their members. Overall, 64 murders were registered on farms in 2015, 71 in 2016, and 68 in the first nine months of 2017 alone.

A question arises:  how many more people are actually targeted among those who live on farmlands in South Africa and what the percentage of white farmers is. It still has to be counted how many households are racially mixed.

Although interestingly enough, the 2016 Community Survey came the closest to the subject suggesting that out of the total of 200,000 agricultural households, 54,000 have a white person at their head.