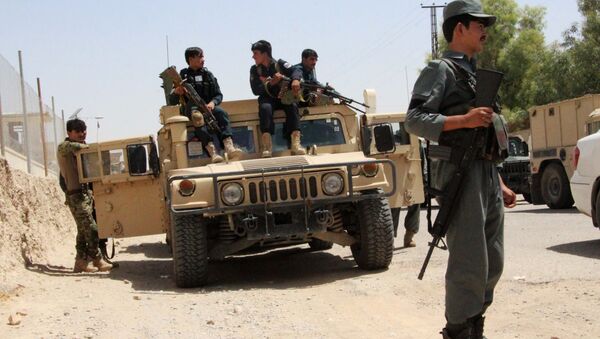 "The Afghan government said that it will soon present a practical and engaging program of peace talks with the Taliban," Wang said at the joint press conference with his counterparts.

The official noted that Beijing and Islamabad welcome Kabul’s actions and are ready to fully support the peace talks with the Taliban and provide necessary assistance as the three regional powers have been seeking to end the war in the region, struggling with the terror group's insurgency.

"Three sides have again confirmed their commitment and support to the process of peaceful settlement in the country, which should be governed by the Afghan people, who also should be the core participants. We urge the members of the Taliban to join this process," Wang stressed.

According to Afghan Foreign Minister Salahuddin Rabbani, Kabul urges the Taliban to agree to take part in peace talks on settling the protracted Afghan conflict.

The minister noted that China and Pakistan had reaffirmed their commitment to an "Afghan-led, Afghan-owned" peace process, stressing the need to utilize all of the countries' leverage and resources to support a political process of reconciliation that must ultimately put an end to the Taliban-led violence in the country.

The statements were made after earlier in the day a first meeting in a trilateral format between the foreign ministers of China, Pakistan and Afghanistan took place in Beijing, agreed in June as a measure to set up a joint crisis-management mechanism. The talks are focused on strategic communications, security dialogue and practical cooperation.

Earlier in December, Afghan Deputy Foreign Minister Hekmat Khalil Karzai has announced during the meeting of the International Contact Group for Afghanistan in Oslo that Kabul was planning to work out a roadmap for the launch of a peace dialogue with Taliban.

A similar stance has been voiced by the country's National Security Adviser Mohammad Hanif Atmar, who has called on Russia to persuade Taliban militants to sit at the negotiating table.

As Russian Special Presidential Envoy for Afghanistan Zamir Kabulov earlier told Sputnik that Moscow has welcomed the idea of constructive dialogue with the armed opposition and expressed readiness to host such talks in Russia.

Various terror groups operating in Afghanistan have lately intensified their activities, with the Taliban declaring to continue jihad (Holy War) after the revelation of the new US strategy in Afghanistan, announced in August. According to the strategy, Washington will increase its military presence on the ground due to the expanding terrorist threat and the increasing activity of these organizations.