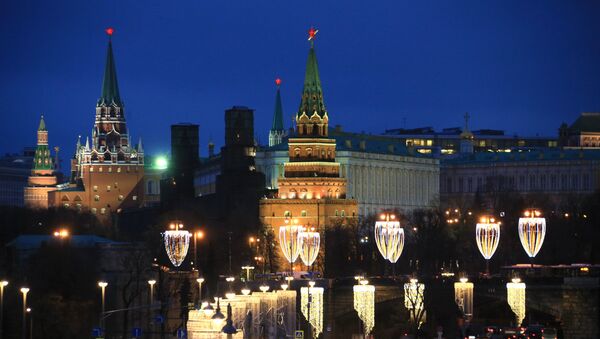 The Kremlin has voiced concern over the use of Cold War rhetoric with regard to the US-Russia relations.

Kremlin spokesman Dmitry Peskov has stated that the strengthening of anti-Russian sanctions would be an "overwhelming risk" for relations between Moscow and Washington.

"This causes our concern, indeed. I would not now use some emphatic phrases like the Cold War and so on," Peskov told reporters, adding that "in any case, we would not want a situation when our bilateral relations, which are already in a rather severe state, are exposed to great, perhaps overwhelming risks and dangers to them."

According to the Kremlin spokesman, Russia is not going to discuss the lifting of sanctions as it is up to those who imposed them.

READ MORE: Russia Will Retaliate Against US Over Expansion of Sanctions — Foreign Ministry

Answering a question whether there are any concerns in the Kremlin about the possible disconnection of Russia from the SWIFT system, Peskov answered that such discussions are not based on official information.

While new US sanctions against Russia were signed by President Donald Trump back on August 2, the US administration has yet to implement the aforementioned measures, but will have to meet the deadline that expires on January 29, 2018. The new sanctions, specifically targeting the Nord Stream-2 project, have been harshly criticized by the EU, with the German foreign minister calling the restrictions illegal and aiming to take Russia’s place on the European energy market.

Russia-US ties have also been overshadowed by other issues, such as the seizure of the Russian diplomatic property in the United States and Moscow's response measures, as well as mutual accusations of violating the Intermediate-Range Nuclear Forces (INF) Treaty.

Why INF Treaty Between US, Russia Remains Key to Global Security
Most recently, Trump approved new sanctions against Russia over its alleged violations of the INF, with US Department of State spokeswoman Heather Nauert saying that Washington currently pursued economic and military measures to pressure Moscow.

In response, the Russian Foreign Ministry said that Moscow was fully committed to the INF and would have to introduce mirror-like measures if one side stopped the implementation.