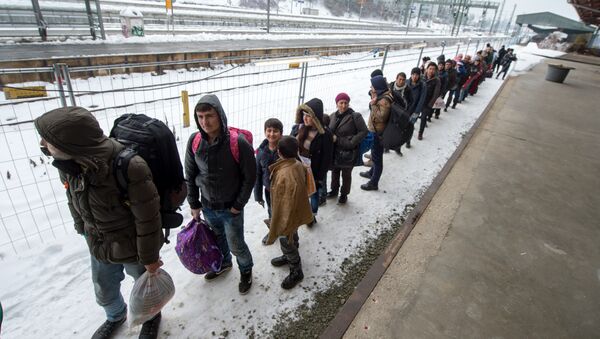 As Germany is struggling to deal with the hundreds of thousands of refugees residing within its borders, the number of unauthorized migrant entries to the country has continued to decline, according to police reports.

German police have stopped about four times as many refugees at the German border in 2016 as in 2017, German Die Zeit newspaper reported.

According to the latest data, this year, about 19,600 refugees were stopped on the border of Bavaria and Baden-Württemberg. In the same period last year, there were about 74,000 unauthorized entries in this area, a police spokesman said, cited by the newspaper.

The illegal activities of smugglers have also significantly declined this year, according to the report.

Alleged Young Afghan Refugee Tries to Drown His German Ex-Girlfriend - Reports
The refugees who tried to illegally enter the country were mostly men aged between 16 and 35 from Nigeria, Afghanistan, Syria and Iraq.

Most of them are said to have arrived by train, while some also traveled by bus or car.

Europe has been experiencing the worst migration crisis in its history since 2015, with Germany being among the countries that has accepted the largest number of refugees.

In an attempt to tackle the crisis, German authorities developed various incentives to decrease the number of refugees staying in the country. They included tougher check-ups on the German borders as well as financial benefits paid to those who voluntarily agree to leave the country.