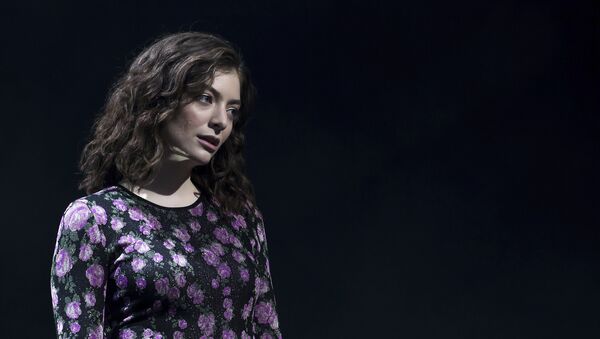 New Zealand pop star Lorde has canceled her concert in Tel Aviv amid strong pressure from supporters of a boycott of Israel over its occupation of Palestine. The decision was made after what the singer deemed as her "learning all the time" and "considering all options" available to her.

"I've received an overwhelming number of messages & letters and have had a lot of discussions with people holding many views, and I think the right decision at this time is to cancel the show," Lorde said as quoted by Naranjah, the Israeli promoters of her show.

The singer has apologized for her decision, adding that she hoped "one day we can all dance."

"We forgive Lorde and wish her a successful tour in Russia and the US," Naranjah stated as a response to Lorde's decision.

#Antisemitism You can't compare @lorde (I've never even heard of her!) with powerful institutions like #EltonJohn & #THEROLLINGSTONES who know how to look after themselves. #Lorde is a 'kid' who has been bullied and terrified by the vile, sinister vermin in the likes of the #BDS.

@lorde THANK YOU. Your decision to not play in Israel sends a strong message, one that says: No Israel: we do not judge it's people BUT we will not stand by while it's government breaks international law.

@lorde You made the right call on Israel. How could you look your kids in the eyes later and say you performed in a country which murders women, steals land and imprisons little girls? You will be targeted by the Zionists now. Be brave. We will back you all the way.#FreeAhed

BDS (Boycott, Divestment and Sanctions) movement, which is believed to be behind the pressure on Lorde, is aiming to end Israel's occupation of the West Bank, while the Israeli authorities regard the group as a threat and accuse it of anti-Semitism.

Earlier this year, the movement failed to convince Radiohead to cancel their show in Tel Aviv.