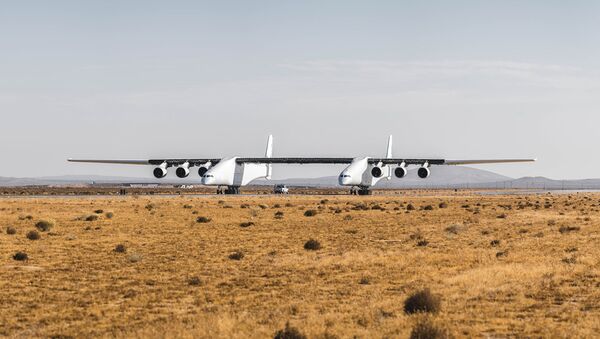 © courtesy Scaled Composites
Subscribe
Scaled Composites’ Stratolaunch, the world’s widest plane intended to take rockets to the stratosphere for launch, underwent its first taxi test on a runway in California.

The Model 351 — aka the Stratolaunch — boasts the world's widest wingspan of any plane. Made almost entirely from composite materials, the twin fuselage aircraft will deliver rockets to high altitude so that they can perform a fuel-saving  air-launch. The Stratolaunch wingspan is measured at 117 m (385 ft), and each of its two fuselages is 73 m (238 ft) long.

Proposed in the middle of 20th century, the idea of launching rockets in mid-air promised to conserve fuel, since the rocket would not have to fight Earth's gravity by spending a amount chunk of fuel just to get off the ground. Due to various reasons, such projects, both in the US and USSR, have never been widely successful, with Orbital ATK Pegasus, being one of notable exceptions.

​Before the new Model 351 Stratolaunch can take its payload into the sky, it must undergo much simpler tests. This time, it rolled its way to the runway of Mojave Air & Space Port in California. The idea was to test the plane's ability to taxi and to move on the ground via its own engines.

Most large aircraft cannot taxi, and require an airport tug to move them around. What might seem like a simple thing, for engineers and test crew becomes a complicated task.

"Multiple systems were monitored throughout the tests, including anti-skid and telemetry in addition to steering and braking. The ground team reported all of these systems operated as expected," Popular Mechanics reported.

"Our crew was able to demonstrate ground directional control with nose gear steering, and our brake systems were exercised successfully on the runway. Our first low speed taxi test is a very important step toward first flight. We are all proud and excited," stated George Bugg, aircraft program manager of Stratolaunch Systems.

After a series of similar tests, with moving speed gradually increasing, the plane will be ready for its maiden flight, sometime in 2018.