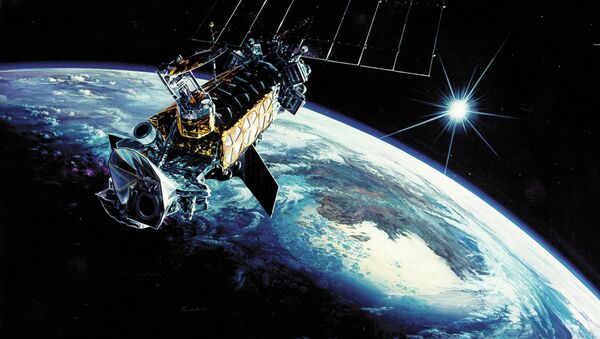 © US Government
Subscribe
As the US Congress contemplates reviving a Cold War-era program of putting ballistic-missile interceptors in space, scientists have lambasted the idea as impractical at best, and life-threatening at least.

Echoing 20th century political moves, Congress has asked the Pentagon the investigate the possibility of deploying ballistic-missile interceptors in space as a means of intercepting a nuclear attack, Space.com reported.

An orbital satellite network would, according to program proponents, be able to hammer incoming enemy ICBMs while they are still in the initial boost phase.

The idea is simple on paper, but a deeper look into the logistics required to make it work reveal the plan to impossible at the current level of human technological development within the constraints of the Washington budget.

US Fighters Arrive in S Korea for Drills After Pyongyang's ICBM Launch - Reports
Researchers and scientists with The Center of Strategic and International Studies (CSIS) have warned that — just like earlier ideas for the space weapon — attempting to reanimate the legacy project is a very bad idea.

Putting aside the global political challenges posed by a weaponization of space, there are many more mundane reasons why an orbital network of armed satellites controlled by one group should never exist.

To hit a missile in its boost phase, the satellite would have to be as close to Earth as possible. Geostationary satellites — those that stay at the same spot over the surface of the planet — are much too high at 22,000 miles to strike an enemy a missile in time.

Low Earth Orbit (LEO) satellites — those constantly traveling around the Earth — would require that the US place hundreds of satellites in orbit just to increase the possibility of hitting a single target.

As ICBMs in an all-out attack are launched in salvos, a few hundreds of satellites would not be enough to ensure an accurate defense, and he network would then have to be increased to thousands of space-based armed satellites, CSIS noted.

And even if you have thousands of deadly remote drones circling the globe it still does not take into account defensive countermeasures and evasion tactics used by ICBMs.

A study performed by the American Physical Society in 2004 found that at least 1,646 satellites would be needed to fully cover the Earth. The study estimated the cost of such a system to be between $67 billion and $109 billion. Even with the entire US military budget being almost $640 billion — that's near to the amount of the military budgets of the next eight nations combined — the figure would be a bill too steep to pay.

The UN Office for Outer Space Affairs reported a total of 4,635 satellites orbiting the Earth in 2017, noting that just 1,738 are currently operational, according to statistics compiled by the Union of Concerned Scientists.

Lawmaker After Trip to DPRK: N Korea Expects ICBM to Guarantee National Security
But let's follow the increasingly absurd notion of a US-controlled space-based orbital network of killer satellites to its logical conclusion. If it was done, if the money was spent and the devices were launched, we;s be safe from enemy ICBMs, right?

Wrong, notes CSIS Aerospace Security Project program coordinator Thomas Roberts, observing at the least that if an enemy first launches a decoy so as to make a gap in the interceptor shield, and then launches an actual salvo through that gap, the Pentagon cannot close that gap fast enough.

According to Roberts, defense dollars are better spent on conventional interceptors, or on launching additional satellites to surveil, track and identify incoming enemy missiles.

"Space-based missile interceptors are a bad idea because of their inefficiency and vulnerability," Roberts observed. "Investments in missile defense would be better directed to other, more effective areas."

"The fact that [putting non-nuclear weapons into space] is not prohibited does not make it a good idea," he added.