Russia to Start Anti-Doping System Payments in Due Time - ROC 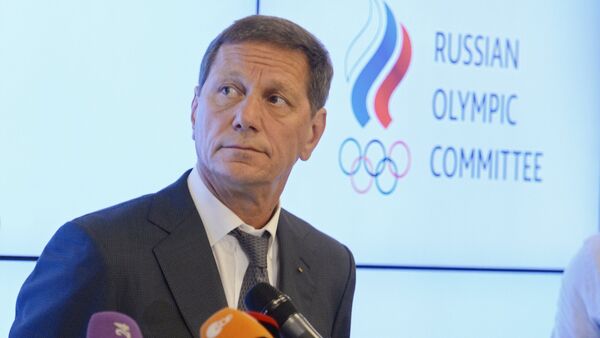 MOSCOW (Sputnik) - Russia will start payments on the anti-doping system, worth $15 million, in due time, in accordance with the International Olympic Committee's (IOC) demands, head of the Russian Olympic Committee (ROC) Alexander Zhukov said Saturday.

Earlier in December, the IOC Executive Board decided to suspend the Russian National Olympic Committee over what it said was systematic manipulation of the anti-doping system. Among other punishments, the IOC demanded payments for the development of the international anti-doping system. However, a poll conducted on December 22, by widely-known Russian pollster revealed that almost two-thirds (62 percent) of Russians support the decision of the country’s athletes to participate in the 2018 Winter.

WADA, IOC Ruling Against Russia 'Over-Politicized' - Scientific Association
In July 2016, the World Anti-Doping Agency (WADA), following an investigation by its Independent Commission led by Richard McLaren on the use of doping by Russian athletes, accused Russia of anti-doping violations, however, the Russian side has denied the accusations. The WADA later assessed the evidence against many of them as insufficient.
Newsfeed
0
Access to the chat has been blocked for violating the rules . You will be able to participate again through:∞. If you do not agree with the blocking, please use the feedback form
The discussion is closed. You can participate in the discussion within 24 hours after the publication of the article.
To participate in the discussion
log in or register
loader
Chats
Заголовок открываемого материала