Putin: Russia Not Seeking Confrontation With Other Powers 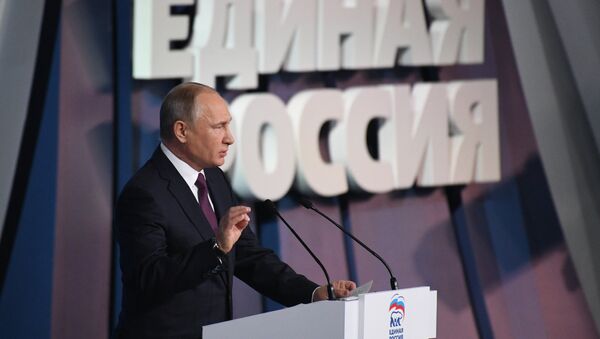 © Sputnik / Grigory Sysoyev
/
Go to the photo bank
Subscribe
The Russian president said at the United Russia party's congress on Saturday that Moscow will build relations with the Western and Eastern partners on the principles of mutual trust.

Delivering a speech at the meeting, Vladimir Putin said that the sovereignty resting on the power of the army and the naval forces can ensure the stable development of Russia.

READ MORE: Moscow to Take Into Account New US Strategy When Insuring Own Security

"Our might is directed against external threats, including terrorism. We do not seek and will not seek confrontation with anyone, we will continue our open and honest foreign policy," the Russian leader has pointed out.

Putin: Serbia May Become Key Transit Hub for Russian Gas If Joins Turkish Stream
Putin went on to note that Moscow will keep boosting the Eurasian economic union and propose the creation of a broader integrational project that would include the western and eastern countries. He added that Russian authorities are ready to work with all the states that look for cooperation on the principles of "trust and equality."

Speaking of the goals that the Russian government has set, Vladimir Putin said that they could be only achieved through national unity and consent.

"We will never sacrifice the security of our citizens and the national interests of our people," the Russian president underscored, adding that the government should focus on the protection of the rights and freedoms of people.

Vladimir Putin also added that Russia should further develop the mechanisms of direct democracy and to treat the political opposition with respect.

Russia has managed to overcome negative tendencies in economy, demography and social, Putin stressed, despite those hurdles were "seemingly insurmountable." Still, the government is facing challenges in the social and educational spheres that it will have to deal with.

"Now Russia has exited from a recession, we have reached a stage of stable economic growth, and, based on economic growth, growth in labor productivity, we must target poverty, do this the way we targeted inflation."

Russia's Achievements 'Only a Foundation' for Future Development

"There are a lot of important, principal, urgent matters, and everything that has already been done is just a foundation, but not a guarantee of the further successful development," Putin said, stressing that the future of Russia's development will depend on the state's ability to ensure changes, to protect and multiply the achievements.

The United Russia party has recently spoken out of its support for Vladimir Putin's candidacy in the upcoming presidential election after he announced his decision to take part in the race as an independent contestant.

000000
Popular comments
But other powers are seeking confrontation with Russia, and are actively preparing for it. Sitting as a lame duck just as before 1941, taking all the punches, won't change the fact that the west is out to destroy you with all means possible, even war when they feel confident enough.

md74
23 December 2017, 14:41 GMT
000000
ivanwa88, tell that to the people of Donbas who are being killed on a daily base. Besides, what about the biochemical facilities being opened by the US in Ukraine near Russia's borders? Why are they doing that? There are other ways these devils can attack Russia. Growing some b a £ £ $ wouldn't hurt Russia,especially in these days of bullying madness by the US and its vassals.