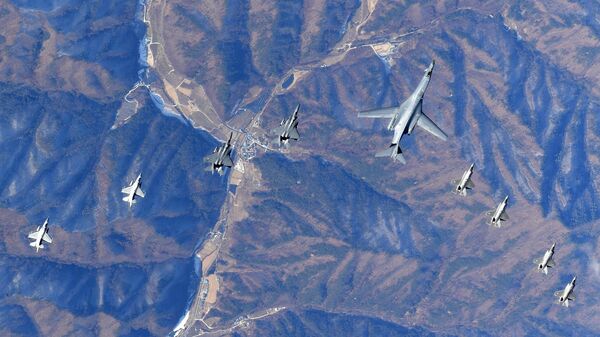 © AP Photo / South Korea Defense Ministry
Subscribe
As Pyongyang digs in its heels and Washington continues its threats, global experts suggest that new UN sanctions against North Korea will not have the desired effect, only increasing the possibility of nuclear conflict in the region.

More invasive US demands, such as shutting off all oil imports and boarding all DPRK ships operating on the open ocean, would have pushed Pyongyang into a corner, suggested Korean affairs expert Lu Chao with the Liaoning Academy of Social Sciences in the northeast China city of Shenyang, cited by the South China Morning Post (SCMP).

The new sanctions will see some 90 percent of refined oil imports cut off to the DPRK, as well as a ban on the profitable export of North Korean food products, machinery, electrical equipment, stone and wood.

Seeking to mitigate the possibility of desperate military moves by an increasingly throttled Pyongyang, the repatriation of DPRK laborers who work outside of the hermit state — sending much-needed cash back to the beleaguered country — was pushed back two years at the request of Russia, according to SCMP.

But new sanctions and bans are seen by many to be a last-ditch tactic to get the DPRK to end its nuclear weapons development and dismantle its missile operations, particularly as Pyongyang has insisted that it regards its nuclear weapons as a means of self-defense, and Washington continues to assert that the US will never accept North Korea as a nuclear power.

As the most powerful nations in the world continue to argue over how to resolve the ongoing nuclear crisis on the Korean peninsula, Chinese military and security experts observe that the new US-led UN sanctions against Pyongyang will be no more effective than previous moves in curbing the threat posed by DPRK nuclear weapons and intercontinental ballistic missile development.

Korean expert Zhao Tong with the Tsinghua Carnegie Centre in Beijing suggested that any new sanctions only serve to increase the rhetoric of war in the region.

"If economic blockades and diplomatic isolation are not enough to persuade North Korea to give up its nuclear program, the risk of war is severe," Zhao said.

Professor of international strategic research Zhang Liangui, with the Communist Party's Central Party School, noted that simple economic pressure would not be successful in causing a policy about-face by DPRK leader Kim Jong-un, cited by SCMP.

"In the current situation, North Korea will continue with its policy of pushing forward its nuclear development program," Zhang asserted.

"The US has said that it won't acknowledge Pyongyang as a nuclear power," he pointed out, adding, "if the negotiations and sanctions fail to work and neither side backs down, war is inevitable."

000000
Popular comments
if war has to happen, a bunch of countries will be so happy to join it in order to introduce marshal law, curfew, tear down opposition, etc. Time for extremism....
l.
24 December 2017, 00:08 GMT4
000000
pushing north Korea to the corner in order to force them to bow down to the USA supremacists will only force them to strike first at USA and allies ,and then the USA will justified their total destruction. if this is what the USA criminals are looking for in order to incite fear in the international community to bow down to them at all given time, than the whole community should rally behind north Korea, because supremacists are not evolve , they are primitive, they don't believe in equal rights, they believe on who ever has the bigger stick, and this is USA mentality.