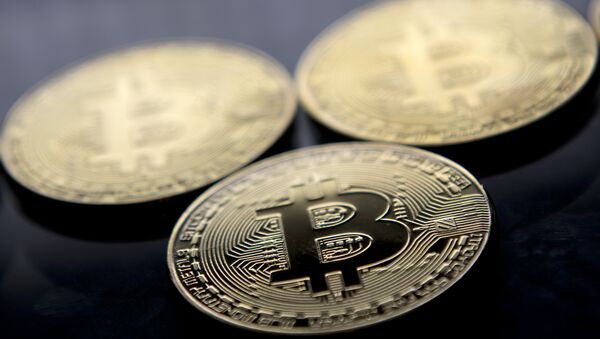 © AFP 2023 / Justin TALLIS
Subscribe
International
India
Africa
It’s been a turbulent week on the cryptocurrency market, where the spectacular gains made over the last month have evaporated in the space of a dramatic seven days.

Over the course of 2017, Bitcoin has made unbelievable gains, soaring from roughly $1,000 at the beginning of the year to a record of nearly $20,000 in December, with a doubling of its value between November and December.

However, the past week has seen the cryptocurrency market experience a string of losses, culminating in a nosedive on Friday, December 22nd with Bitcoin falling below $11,000, the BBC writes, citing figures from the Coindesk cryptocurrency exchange website. The British broadcaster adds that Bitcoin recovered to over $13,000, but the price remains volatile.

The major losses in value that Bitcoin suffered over the course of the week have led, according to the BBC, to a surge in trades at Coinbase on Friday, one of the major Bitcoin exchanges. However, as a result of technical slowdowns, the exchange was prompted to halt exchanges twice during the day.

The exchanges CBOE and CME also saw trading of certain Bitcoin futures contracts suspended due to the rapid price change. These contracts essentially function in a way that allows investors to place bets reflecting where they predict the price of Bitcoin will be at different times in the future, the BBC reports.

Speculation has begun to arise, as the market is attempting to make sense out of the downward slump that came seemingly out of the blue.

According to Charles Hayter, the founder and CEO of the website Cryptocompare, the market is still driven primarily by sentiment, the BBC sites him as saying. After an enormous upswing in prices, people followed suit as the mood changed and prices slumped.

Another issue is that of confidence in the market, with some people being critical of the suspensions that Friday's trading experienced.

"It is not OK to just take trading offline randomly through the day," said Bitcoin trader Nick Colas, a Bitcoin trader, to the BBC, adding that "The robustness of that system is just as important to their confidence… as the price of crypto-currencies themselves."

Other explanations stipulate that there is a seasonal explanation for the dip in cryptocurrency prices. The reason for this, according to Forbes magazine, is that there are a series of major holidays, including Christmas and New Year at the end of December, which make this a notoriously bad time for savings and investments.  Forbes goes on to say that insider trading and market manipulation could be possible explanations.

In the midst of the turbulence and fears that the cryptocurrency market might be a giant bubble, some authorities have begun issuing warnings to people seeking to make investments into the market.

"I see Bitcoin as a "Tulip-mania", as a bubble out of control," said Lars Rhode, head of the Danish Central Bank to the national broadcaster DR.

The chief executive of the UK's Financial Conduct Authority also warned investors that they should be prepared to lose all their money if they decide to invest in Bitcoin, British investment magazine Investment Week writes.