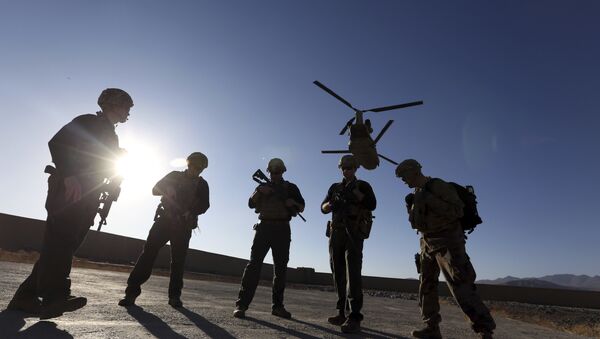 On Thursday, US Vice President Mike Pence made a surprise visit to Afghanistan to meet with Afghan President Ashraf Ghani, his first trip to the country since taking his vice presidential oath.

Pence was there to discuss changes to the US strategy in Afghanistan with Ghani and Chief Executive Abdullah Abdullah, and also to offer his thanks to US troops ahead of the Christmas holiday.

"We're here to see this through," Pence told Ghani. "We believe that we are now on a path to achieving a lasting victory for freedom and security in Afghanistan."

Pence echoed the victory statement while addressing US troops stationed in the country.

"I believe victory is closer than ever before," Pence told them.

​But what exactly would victory in Afghanistan look like? According to Brian Terrell, co-coordinator for Voices for Creative Non-Violence, it's likely not what most people picture.

Speaking with Radio Sputnik's Loud & Clear, Terrell said not to expect any end to violence in the war-torn country. This "is not a victory that… is pegged for on the calendar."

Trump announced in August that he was revising the US strategy in Afghanistan, which steered away from the idea of "nation-building" and instead aimed at addressing terrorist threats in the region.

"The policy that [US President] Donald Trump is talking about is going to keep this war going," Terrell predicted. This war isn't about trying to beat the "bad guys," he said, but about maintaining a cash cow for defence corporations.

"Our presence in Afghanistan is making it more dangerous," Terrell told show hosts Brian Becker and John Kiriakou. "[The war is] in the interest of the multinational corporations that are cashing in on this… [it's not in the interest] of the American people or the Afghan people."

And it's best not to expect US politicians to get fed up and bring the troops home any time soon, the long-time peace activist commented.

"The irony is that when people in Congress are talking about the authorization for use of military force that was from 2001… what they are saying is that we need to change laws so that these ongoing wars will be legal and not to stop them."

The US currently has an estimated 15,000 US troops in Afghanistan, Time reported. Another thousand military personnel are expected to join in early 2018.