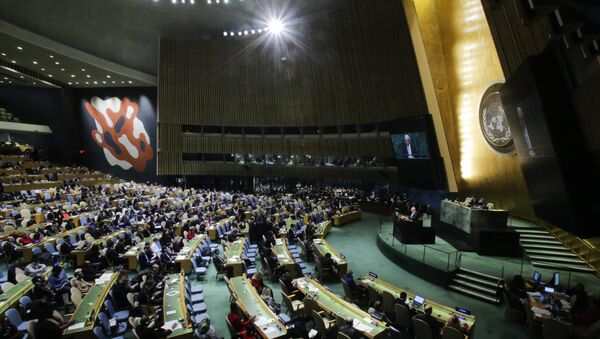 © AFP 2023 / EDUARDO MUNOZ ALVAREZ
Subscribe
International
India
Africa
In an unprecedented situation, Washington failed to convince its closest allies in the Arab world to support Donald Trump's recognition of Jerusalem as Israel's capital in the UN General Assembly, Aiman Abdel Shafi an academic specializing on international relations and the US affairs told Sputnik.

The United States is unlikely to reverse its decision on the recognition of Jerusalem as the capital of Israel, regardless of the UN General Assembly nearly unanimous vote in favor of rejecting Donald Trump's controversial move on December 21, Aiman Abdel Shafi an academic specializing on international relations and the US affairs told Sputnik Arabic.

"America showed its true ugly face when its representative at the UN spoke about the US contributions to the organization," Shafi said referring to an earlier remark by US Ambassador to the United Nations Nikki Haley who highlighted that Washington, the UN's most generous contributor, will remember the voting day.

US President Trump went even further, openly threatening countries with funding cuts ahead of the Thursday vote in the UN General Assembly (UNGA).

Arab League Welcomes UN Resolution on Jerusalem - Secretary General
However, regardless of the US threats, the draft document co-sponsored by Turkey and Yemen was adopted by a margin of 128-9, with 35 abstentions.

"The US has failed to persuade its allies, especially the Arabs, to vote in favor of Trump's decision and recognize Jerusalem as the capital of Israel. However, some states have fallen under [the US] influence," Shafi said, referring to those 35 countries that abstained or voted against (Guatemala, Honduras, Israel, Marshall Islands, Federated States of Micronesia, Nauru, Palau, Togo).

The academic highlighted that it was the first time that the US had publicly intimidated other states.

"However, the Americans will not benefit from it, they did it for Israel," Shafi said. "We see that the US is ready to act to a manner detrimental to its interests on the international arena in order to satisfy the Israelis and support their state. I can't see any other reasons for the US actions."

Ex-CIA Chief Brennan Blasts Trump for Jerusalem Vote Threats
Shafi believes that the main reason for the US political and diplomatic failure was the country's arrogant position toward the other states and its attempt to negotiate the issue from a position of strength. As a result, Trump's Jerusalem move was condemned by the US closest allies. According to Shafi, this was an unprecedented event.

The UNGA resolution demanded that "all States comply with Security Council resolutions regarding the Holy City of Jerusalem, and not recognize any actions or measures contrary to those resolutions."

The vote in the UNGA followed an unsuccessful attempt to adopt a similar draft reflecting the international body's regret over the US decision on the Holy City in the UN Security Council. The document drafted by Egypt and supported by 14 states was vetoed by the US, a permanent member of the Council.

According to the official UN website, "resolutions in the Assembly are non-binding and do not carry the force of international law as do measures agreed in the Security Council."

On December 6 the US president declared Jerusalem as the capital of Israel and ordered the State Department to move the US Embassy from Tel Aviv to the Holy City. The step triggered a wave of protests in the region resulting in Hamas announcing the Third Intifada on December 12.

The views and opinions expressed by Aiman Abdel Shafi are those of the academic and do not necessarily reflect those of Sputnik.