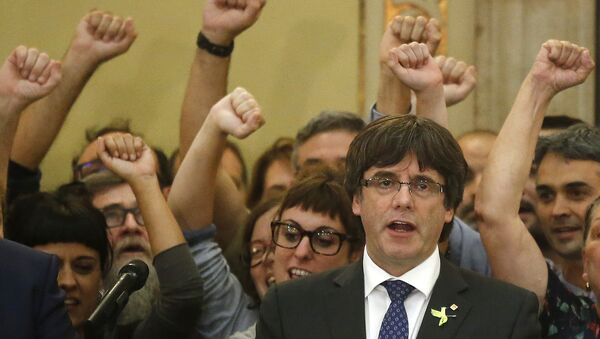 "Rajoy lost the plebiscite he was counting on," Puigdemont was quoted as saying by the RTBF broadcaster.

On Thursday, Catalans cast ballot in as snap parliamentary election after Rajoy dissolved the regional government in response to the Generalitat's adoption of a declaration of independence from Spain in October.

The pro-independence bloc consisting of Puigdemont's Together for Catalonia (JuntsxCat), Republican Left of Catalonia (ERC), led by Puigdemont’s former deputy Oriol Junqueras, and the far-left Popular Unity Candidacy (CUP) retained a majority in the parliament with 70 seats, two seats over the 68 required for an absolute majority.

With 93.95% of the votes counted in #Catalonia regional elections, pro-independence parties are on track to win a majority of parliamentary seats. A major blow for PM #Rajoy who was hoping to silence independence fever

Meanwhile, the pro-unity bloc consisting of the centrist Citizens party, The Socialists (PSC), the leftist In Common We Can (CatComu-Podem) and Spanish ruling Popular Party gained 65 seats in total.