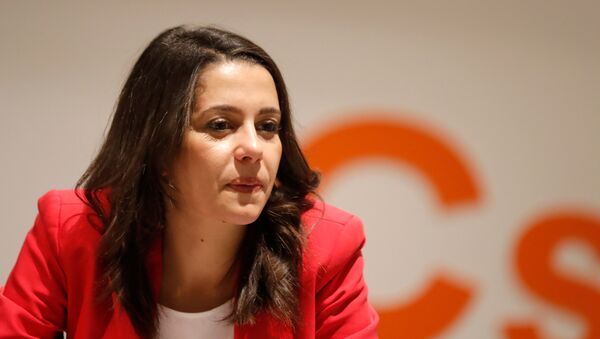 BARCELONA (Sputnik) – Ines Arrimadas, the leader of Citizens party, which won the Catalan snap parliamentary election, expressed hope on Friday that "common sense" would come back to the autonomous region.

On December 21, Catalonia held a legislative election following the dissolution of the regional parliament, achieving a record high turnout of almost 82 percent. With almost 100 percent of votes counted, 25.3 percent of voters cast their ballots for the pro-unity Citizens party, thus ensuring 37 mandates.

"Yesterday was a historic day. The party which stands for the constitution has, for the first time, won both on votes and mandates. We will continue to work on bringing common sense back to Catalonia, to offer a general project to the Catalans," Arrimadas said.

​TWEET: "We are happy with the result but we believe that there is still a lot to do. Bipartisanship has failed to offer an exciting and reformist project for Spain."

The leader stressed that her party did not run in the election "copying nationalist ideas."

Aditionally, Spanish Prime Minister Mariano Rajoy said that he was ready for talks with the Ciudadanos (Citizens) party, which won Thursday's parliamentary elections in Catalonia.

"The person I will have to sit [at the negotiating table] is the one who has won the elections, which is Mrs. [Ines] Arrimadas [the leader of the Citizens party]," Rajoy said as quoted by the El Pais newspaper, when asked if he would accept Puigdemont's proposal to hold a meeting.

Earlier in the day, dismissed Catalan leader Carles Puigdemont said he was ready to meet for talks with Rajoy after the results of Thursday's elections showed major support for pro-independence parties. The elections have shown that all the disagreements may be settled through voting, but Rajoy has never agreed for dialogue, Puigdemont noted.