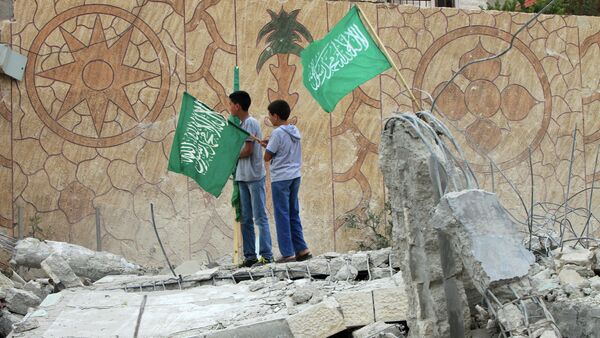 The Gaza leader said that the committee for control over the reconciliation process would be formed shortly.

"We need to rescue reconciliation before it is too late. Especially after Hamas committed to transfer to the government all the ministries and border crossings. We have taken tough measures for reconciliation," Sinwar said during a press conference at a youth forum in Gaza.

Hamas Announces Beginning of Third 'Intifada' Against US Decision on Jerusalem
In October, Hamas and its rival Fatah faction signed a reconciliation agreement, implying the transfer of control over the Gaza enclave from Hamas to Fatah by December 1. The deadline was however moved by 10 days, and the process faced what Fatah called "obstacles."

Hamas gained control of the Gaza Strip after a short war with the rival Fatah in 2007, which led to the enclave’s blockade. Fatah has repeatedly criticized Hamas for splitting the country and blocking the Palestinian Unity Government, created in 2014, from ruling Gaza.

In September, Hamas announced its decision to dissolve the administrative committee, which has been running the Gaza Strip since 2007, and start talks with Fatah, headed by Palestinian Authority's President Mahmoud Abbas, that controls the West Bank, to hold general elections in Palestine.

In early October, the Palestinian Unity Government held its first session in Gaza since 2014 as part of implementation of the arrangements aiming to settle the long-standing conflict between the Palestinian parties.