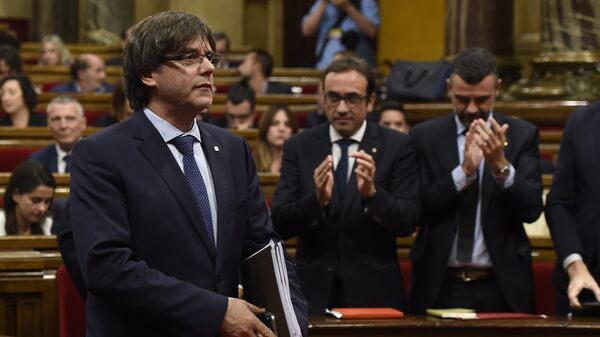 MOSCOW (Sputnik) - Catalan pro-independence supporters expect former head of the regional government, Carles Puigdemont, to return to Catalonia from Belgium, an activist of the Catalan independence movement and a spokesperson for Catalan Countries of the International Commission of European Citizens (ICEC), told Sputnik on Friday.

"The main objective of the election is to choose a president and the only parties which are able to choose a president are pro-independence parties, which won the absolute majority of seats. So, we expect Puigdemont to return back and to be re-appointed,"  Anna Arque, an activist of the Catalan independence movement and a spokesperson for Catalan Countries of the International Commission of European Citizens (ICEC) said.

The activist said it was time to "consolidate the collective will of the Catalan people."

"The next step is obviously to form a government with president Puigdemont and with the rest of the members of the government, who were put in jail or forced into exile," Arque said.

Spanish PM Failed as Pro-Unity Bloc Lost Election in Catalonia - Puigdemont
The activist added that the election results of the pro-independence parties were particularly noteworthy since "two of their three candidates were unable to campaign because one is in jail and another one is forced into exile."

Earlier in the day, Puigdemont reacted to the vote results by calling on Madrid to suspend Article 155 that imposed its direct rule over the region.

On December, 21 the election held in Spain's autonomous region on Thursday resulted in the Citizens party, which wants Catalonia to remain part of Spain, securing 25.37 percent of the vote and 37 seats in the 135-seat parliament, while pro-independence Together for Catalonia, led by Puigdemont, won 21.65 percent and 34 seats. Republican Left of Catalonia–Catalonia Yes, another pro-independence political force, got 21.39 percent of the vote and 32 seats.

In November, Spanish courts issues a European Arrest Warrant for Puigdemont and several other former members of the Catalan government, although in December, Spain dropped the warrant, saying that the former president of Catalonia appeared willing to return.

Puigdemont would only return to Spain after the parliamentary election, his lawyer said in December.

Spanish Prime Minister Mariano Rajoy called the snap election in late October after dissolving the Catalan parliament, which had shortly before approved the declaration of the region's independence. Puigdemont, who is facing sedition, rebellion and embezzlement charges in Spain, fled to Brussels. The declaration of independence followed the referendum, held on October 1 despite Madrid's protests. The independence was backed by over 90 percent of the voters.