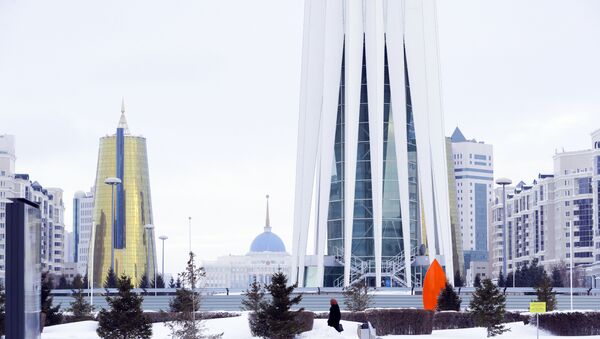 MOSCOW (Sputnik) - Russia, Turkey and Iran, the guarantors of the ceasefire in Syria, have agreed to establish a working group on the release of detainees, adopted a statement on humanitarian mine clearance in the country and decided to meet in January to prepare for the Syrian National Dialogue Congress during the 8th round of the Astana talks.

The latest two-day round of the negotiations in the capital of Kazakhstan finished on Friday.

READ MORE: The Final Score: Russia's Military Op in Syria by the Numbers

Lavrov said that the talks focused on the issues related to the political settlement of the Syrian conflict.

"Due to the fact that the task of eliminating the terrorist threat has been largely accomplished, we concentrated today on issues that need to be resolved in order to give the necessary pace to the political process," Lavrov said at a joint news conference after Moscow talks.

The Russian foreign minister said this meeting was a good opportunity to "advance the overall task of the political settlement."

Lavrov and Shoigu also used this meeting with de Mistura to explain to him in detail Russia's initiative on the Syrian National Dialogue Congress in Sochi.

Russia, Turkey, and Iran issued a joint statement on Friday, saying that the next round of Astana talks would be held in the late February.

The three states also said that they saw the upcoming Syrian National Dialogue Congress in Sochi as a facilitator of the intra-Syrian talks in Geneva, held under the UN auspices.

Moscow, Ankara, and Tehran agreed to meet in Sochi on January 19-20 to prepare for the congress, which is slated for January 29-30.

"The Islamic Republic of Iran, the Russian Federation and the Republic of Turkey as guarantors of the observance of the ceasefire regime in the Syrian Arab Republic reaffirm their determination to closely interact on a regular basis to support preparation for and convening of the Syrian national dialogue congress in Sochi on 29-30 January 2018… to this end three guarantor states will hold a special preparation meeting in Sochi before the congress, on 19-20 January 2018," the joint statement read.

The three guarantors also agreed to set up a working group on the release of detainees and adopted a statement on humanitarian mine clearance in the conflict-torn country.

"Adopt, with a view to building confidence between the conflicting parties in Syria, the 'Regulation on the working Group on the release of detainees/abductees… as well as the identification of missing persons' and the statement on humanitarian mine action in Syria including the UNESCO list of cultural heritage sites," the document said.

De Mistura praised the agreement on detainees, saying that it could become the first step toward a comprehensive arrangement between the conflicting parties.

The head of the Syrian opposition delegation at Astana-8 talks, Ahmad Toma, said that the mechanism for the release of the detainees was still missing but the establishment of the working group on this issue was a step forward.

"Today this issue [of detainees release] was discussed widely. We still do not have a document for choosing a comprehensive mechanism for solving it, but anyway I hope, it [working group on detainees release agreed upon by guarantors at Astana-8] is an essential step forward, and we have three guarantors, and we will reach an agreement for finding common ground," Toma told reporters.

Moscow, Ankara and Tehran said they were prepared to closely coordinate preparations for the Congress and urged the Syrian government and opposition to cooperate with this effort.

"The discussions focused on de-escalation areas, including in Idlib. We consider presence of Turkish troops on Syrian territory as blatant aggression. It contradicts what was agreed in Astana-4 in May on the role of guarantors in de-escalation areas," Jaafari said at the plenary session of Astana-8 meeting.

The Syrian diplomat also called for the withdrawal of US troops from Syria, calling it an "aggression" against the country.

"We demand for immediate and unconditional withdrawal of foreign troops," he said.

Jaafari also confirmed that the delegation from Damascus would take part in the Syrian National Dialogue Congress.

The Syrian opposition plans to mull over the participation in these talks, according to Toma.

"This round of talks was successful, first of all we have managed to note a progressive development of the situation, the reduction of the level of violence, observation of the ceasefire regime. I should say that quite intense fighting continues in certain areas, but this is mostly provocative in nature and mainly initiated by the so-called implacable armed opposition," Lavrentyev told Sputnik.

Lavrentyev told Sputnik on Friday, after the end of the talks, that de Mistura had been assured in Moscow that the settlement process in Astana was not in conflict with the intra-Syrian talks in Geneva.

Lavrentyev added that de Mistura was planning to convene the next Geneva meeting in late January, sometime around January 21.

The Russian special envoy also said that the reconciliation talks in Astana were becoming a good support system for the promotion of the peaceful settlement.

'ALL SIDES TO SPEAK AT SYRIAN NATIONAL DIALOGUE CONGRESS'

Russia, Iran, and Turkey paid a lot of attention to the Syrian National Dialogue Congress in Sochi, including its participants and timing, during the Astana negotiations, Lavrentyev said Friday.

"We, of course, hope that the special envoy himself will come to Sochi and will participate [in the Congress]. We very much count on this, and we directly talk to him about it. It is clear that the decision will be taken by the UN leadership, but we believe that this Congress should take place under the aegis of the United Nations, and of course this structure should be represented there in the widest possible way, and not only by the members of this organization, which are Russia, Turkey, Iran, Syria and others," Lavrentyev said.

US-Led Coalition: Daesh Still Present on Both Sides of Euphrates in Syria
According to him, all the sides to the Syrian conflict, including the government, internal and external opposition groups, will have the right to express their own vision of Syria's future at the Congress.

"But the most important thing is that people express their attitude not only to the acting authorities but in general to how they see a further way forward, how they see the organization of truly impartial, fair and transparent elections on their territory… There are many issues," Lavrentyev added.

Lavrentyev also expressed hope that the Syrian National Dialogue Congress will not be a one-time event and assumed that the work on drafting a new Syrian constitution can continue in Damascus, Geneva or any other place.

"It is necessary to set a clear task and goal and we must strive for it. And then it is a process. We expect that this will not be a one-time event. If it goes under the auspices of the United Nations, under Geneva, this will be absolutely normal and good. This will be precisely the contribution that we make to the issue of the political settlement," Lavrentyev said.

According to him, the Congress in Sochi should lay the basis for the work on the new constitution.