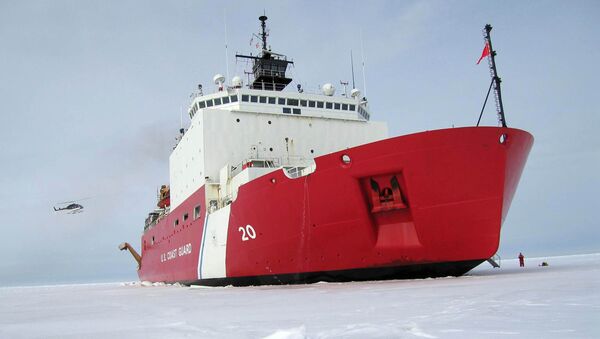 The United States’ only heavy icebreaking vessel has departed Hawaii for Antarctica on a military mission to resupply US bases near the South Pole, the US Coast Guard said in a press release on Thursday.

WASHINGTON (Sputnik) — The icebreaker Polar Star’s commander Capt. Michael Davanzo characterized the operation as one of the most difficult US military peacetime missions due to the harsh environment and extreme remoteness of the destination.

"Operation Deep Freeze, the US military’s contribution to the National Science Foundation-managed, civilian USAP [US Antarctic Program] is unlike any other," Davanzo stated in the release.

US Need for Icebreakers Remains Critical - Healy Icebreaker Commander
Polar Star’s crew will establish a channel through 15 miles of ice in McMurdo Sound, Antarctica, sometimes up to ten feet in thickness, to resupply the National Science Foundation’s McMurdo and Amundsen-Scott South Pole stations, the release said.

Is this penguin looking for a job or just checking out the #USCG Polar Star crew during their deployment to Antarctica? #WorldPenguinDay pic.twitter.com/Y8rvvaRHxh

The United States has two operational icebreakers, the 41-year-old heavy duty vessel Polar Star and the medium duty Healy, which is used for scientific research, according the US Naval Institute.

By comparison, Russia operates more than 40 icebreakers and is building 11 more with an eye to developing resources in the Arctic region, according to published reports.