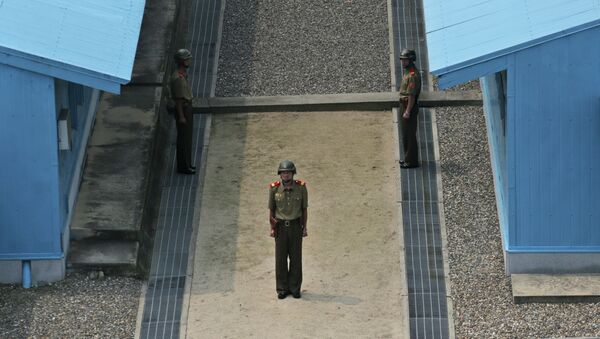 For the second time in as many months, a North Korean soldier has defected to the South across the the demilitarized zone (DMZ), the heavily guarded border that divides the two Koreas, Yonhap News Agency reports.

South Korean Defense Ministry Spokesman said on Thursday that the "low-ranking" North Korean serviceman made his way across the central part of the heavily militarized land border at around 8:04 a.m. (2304 GMT Wednesday).

According to Yonhap News Agency, the defector managed to cross the DMZ due to poor weather conditions. The North Korean fugitive suddenly appeared before the Southern guard post amid the heavy fog that had covered the border area.

North Korea's Deputy Ambassador Defects in London
However, the news agency said the South Korean military opened fire to ward off DPRK border guards who'd gone out to search for the defector. A score of rounds was reportedly fired.

Currently, the new defector is being interrogated by South Korean military officials. According to South Korean media reports, the thorough questioning and scrutiny procedures are usually applied to anyone choosing to leave the northern part of the Korean peninsula to determine whether the fugitive will engage in espionage. Usually, after the meticulous screening, a North Korean is offered a first assignment providing assistance to the South Korean authorities and local non-governmental entities.

North Korean Soldier Defects to South Korea Across Demilitarized Zone
Last month's defector, 24-year-old Oh Chong-song, was reportedly the fourth person to defect by crossing the DMZ this year. He was shot five times by his former comrades in the dramatic attempt to escape the neighboring country in a hijacked military vehicle.

On average, about 1,500 North Koreans defect to the South annually. However, the DMZ is so heavily guarded that most go there via a circuitous route: fleeing across North Korea's northern border with China and then entering sympathetic countries like Mongolia or Thailand that will "deport" them to South Korea.