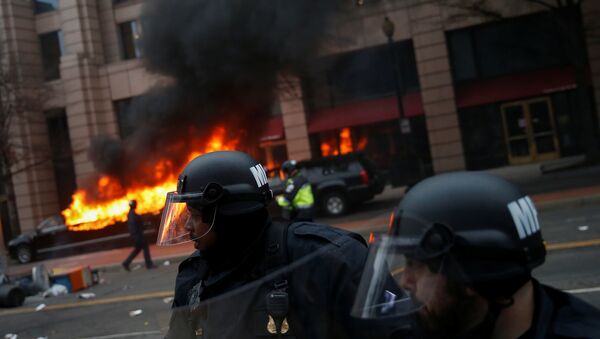 © AP Photo / Adrees Latif
Subscribe
The first group of protesters arrested during the inauguration of US President Donald Trump on January 20 have been found not guilty of all charges of misdemeanor rioting and property destruction by a jury.

Michelle Macchio, Christina Simmons, Jennifer Armento, Oliver Harris, Brittne Lawson and Alexei Wood were among the roughly 200 people arrested January 20 for their participation in anti-Trump protests that police say turned violent. The charges against them account for as much as $100,000 in property damage.

Washington, DC, Superior Court Judge Lynn Leibovitz, a former homicide prosecutor known for siding with prosecutors, acquitted the protesters of felony rioting earlier in December. She then passed the other seven charges — two for misdemeanor rioting and five for felony property destruction — to the jury, which found them not guilty on Thursday.

The highest profile of the defendants, 37-year-old Wood, denies any participation in the protests, saying he instead attended in his capacity as a photojournalist. The prosecution's case against Wood hinges on footage he took, in some of which he can be heard reacting to scenes of property destruction with a loud "Woo!"

Lawson and Macchio attended the protests while equipped with medical supplies, which the prosecution argued was an implicit admission of violent intent. They said they were prepared to act as street medics for anyone injured.

The legal teams for the defendants framed the case as a suppression of their clients' First Amendment rights to free speech and protest. "The United States of America, ladies and gentlemen — you saw the logo on there, the Justice Department logo — comes here, I submit to you, seeking to criminalize Mr. Harris's First Amendment rights," argued Steven McCool, who is defending Harris.

Assistant US Attorney Rizwan Qureshi replied by reportedly accusing the protesters of attempting to destroy the US capital and then "hiding behind the First Amendment."

The trial began November 20, but state prosecutors admitted earlier in December that they had no evidence that any of this group of six had caused any property damage or committed any violence. However, during closing arguments on Friday, assistant US attorney and prosecution leader Jennifer Kerkhoff told the jury that the mere presence of the protesters in the streets made them guilty of aiding and abetting rioting once the protests turned violent.

A total of 194 J20 protesters are to be tried for alleged criminality during the inauguration, and today's acquittal must be taken as a promising precedent for their upcoming trials. The prosecution's argument hinged on all protesters being culpable for the alleged violent actions of some protesters, an argument that did not fly with the judge or jury and likely will not fly in successive trials.

Anyone that’s ever been in kettle, gone to a march, worn all black, masked up, live streamed, reported, organized, made art for action, this #j20 verdict will effect the future of movements for generations. It makes pretty much everyone accomplice to conspiracy.

This is a stunning rebuke for the U.S. Attorney's Office, which argued that protesters who were part of a protest (and journalists covering the protest) should be held liable for any property destruction committed by other people at the protest https://t.co/jvh2BR0wfa