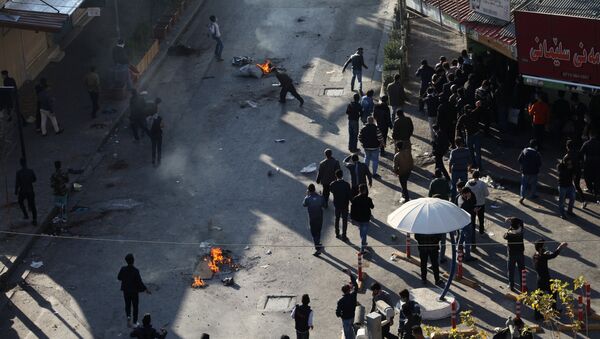 © REUTERS / Stringer
Subscribe
While protests continue to rage on in Iraqi Kurdistan, the parliamentarians of the autonomous region call upon the people to express their demands in a civilized and peaceful form. Speaking to Sputnik, Iraqi Kurdistan politicians have condemned violent rallies, suggesting that the major fault for the economic hardships lies with Baghdad.

For a fourth day in a row, protests continue in Iraqi Kurdistan with hundreds of people calling upon the Kurdistan Regional Government (KRG) to pay salaries and improve social conditions. The region's parliamentarians share their concerns with Sputnik Turkey.

"Protests should be carried out in a civilized, peaceful form," Muna Kahveci, deputy chairman of the Turkmen Reform Party and IKP MP told Sputnik. "We, the deputies of the Iraqi Kurdistan Parliament (IKP), support the people who stand for their democratic rights. However, during the protests, the demonstrators set fire to the offices and headquarters of the parties, which is absolutely inacceptable."

Kahveci urged the protesters "to show prudence and demand the protection of their rights while holding peaceful demonstrations and refraining from violence and terrorist attacks."

Unrest in Iraqi Kurdistan Caused by Economic Difficulties - Kurdish Party
Muhammed Saddettin Ilhanli, the chair of the Turkmen Development Party, noted that while the root cause of the protests lies in the current economic hardships in Iraqi Kurdistan, the protesters have apparently forgotten about their primary goals.

"We believe that they pursue some other political tasks," he suggested. "The people should hold protests against the central government of Iraq that does not allocate funds from the budget to [Iraqi Kurdistan] in accordance with the legislation for almost 4 years, under various pretexts and excuses."

According to Ilhanli, the KRG had to carry out economic reforms to improve the situation in the region given the fact that oil revenues do not satisfy the requirements of the autonomy.

The politician believes that the purpose of the protests is not to just express the people's dissatisfaction with the current situation, but to achieve certain political benefits.

"The best way to solve the problem is to hold dialogue between the Iraqi authorities and the leadership of the Kurdish region," he underscored.

Iraqi Kurdistan Parliament Speaker Resigns Amid Protest in Region - Source
Ilhanli believes that Baghdad is doing whatever it takes to impose its rules and strengthen its influence in the autonomy: "In the Kurdish region, Turkmens, Assyrians, Kurds and other nationalities live side by side. We do not want the ethnic stability to be broken. Therefore, we urge the demonstrators to express their demands in the framework of peaceful protest actions," the politician emphasized.

For his part, Said Mamuziny, the representative of the ruling Kurdistan Democratic Party (KDP) in Mosul, pointed out that the rallies are held under the pretext of non-payment of salaries.

"In contrast to Sulaymaniyah the situation in Erbil and Dahuk is calm," Mamuziny highlighted. "Demonstration should be held in a peaceful manner. We condemn the actions of those protesters who set fire to headquarters of [political] parties further destabilizing the situation. The people and state organizations should not suffer damage."

Iraq Kurdistan Lost 50% of Oil Profits After Baghdad Took Over Kirkuk - Lawmaker
On Monday protests erupted in Iraqi Kurdistan's major cities, such as such as Erbil and Sulaymaniyah and in other parts of the autonomous region. The demonstrators set fire to the office of the ruling KDP party near Erbil, protesting against worsening living conditions.

On Wednesday, the protesters set fire to the offices of the KDP and the opposition party of the Patriotic Union of Kurdistan (PUK) and the Gorran (Change) Movement in Sulaymaniyah and other cities of the region. Earlier on Tuesday, violent rallies resulted in at least 7 killed and more than 80 injured.

In an interview with Sputnik Dilshad Shaaban, deputy head of the energy and natural resources committee in the Kurdistan Parliament, revealed in early November that following the return of oil-rich Kirkuk to Iraq the autonomous region has lost almost 50 percent of all of their revenues from crude trade. Tensions in the region have been steadily escalating since the KRG held an independence referendum on September 25.

The views and opinions expressed by Muna Kahveci, Muhammed Saddettin Ilhanli, Said Mamuziny are those of the speakers and do not necessarily reflect those of Sputnik.